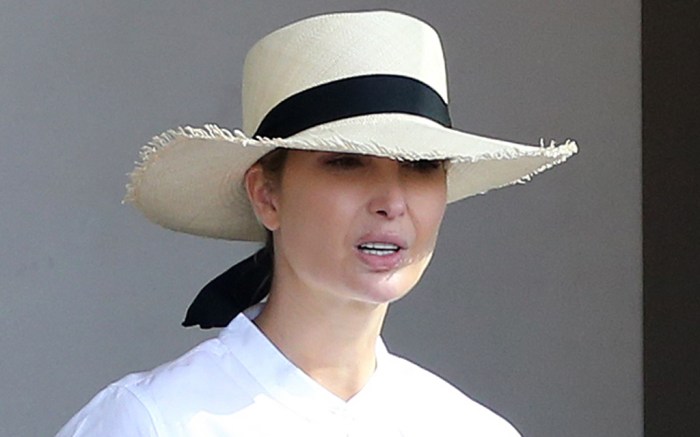 Ivanka Trump made her way out into Miami this afternoon, joining her husband Jared Kushner for a warm-weather excursion.

The former advisor to the president recently joined her family for an extended stay in Florida after departing Washington D.C. following the tenure of her father former President Donald Trump’s term in office. Today, Ivanka modeled a white rolled-sleeve blouse layered over dark-wash skinny jeans with a straw wide-brim hat to match.


To complete her beach town style, the former footwear head herself opted for black espadrilles. The slip-on shoes included a squared vamp with soft uppers and a rope-style outsole.


Ivanka’s husband, Jared Kushner, also made his way out today from their condo in Florida. The investor and real estate developer went for a dad-style look, matching a New York Mets cap to a collared shirt and khaki pants. Kushner’s footwear of choice came courtesy of Mizuno; similar black and white sneakers retail for $85 at Zappos.com.


When it comes to shoes, Ivanka Trump herself oftentimes prefers pumps for her more formal occasions; her go-to picks come from brands like Gianvito Rossi along with Jimmy Choo and Burberry. Se also previously worked in the industry, launching her own clothing and footwear line in 2011 before shuttering in 2018.

Beyond her beachy attire, the former first daughter also has stepped out in more affordable picks from Rothy’s flats and Gola for J.Crew sneakers. When it comes to fashion and apparel, Ivanka Trump herself also typically favors major labels like Chanel, Dolce & Gabbana and Oscar de la Renta; she also teams her go-to heels to designs from the likes of Brandon Maxwell and Altuzarra.

Today’s outing comes amid Trump’s second impeachment trial in the Senate. The former president is facing charges of inciting the insurrection at the U.S. Capitol.

Prep for warm weather in these next dark espadrilles.

Click through the gallery to find more of Ivanka Trump’s footwear looks from years past.