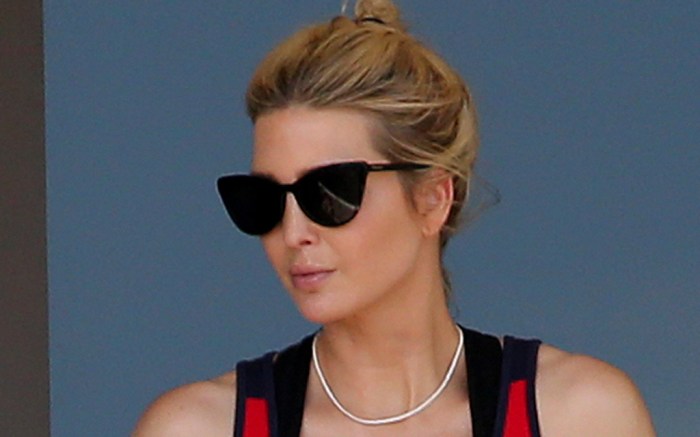 Ivanka Trump debuted her beachside style this week as she takes up residence in Miami.

The former first daughter recently joined her family for an extended stay in Florida after departing Washington D.C. following the tenure of her father former President Donald Trump’s term in office. Today, Ivanka showed off her warm-weather style as she stepped out onto the balcony of her new home.

For the occasion, the 39-year-old opted for a sleeveless red and black striped midi-length dress complete with a scooped neckline and a high-leg slit. She further accessorized with oversize sunglasses and a white pearl single-strand necklace.


Before she headed to Florida, Ivanka attended one last farewell ceremony for her father on Inauguration Day at the Joint Base Andrews in Maryland; former President Trump opted against attended the inauguration of his successor President Joe Biden, the first time an acting president has decided to do so in modern times.

For the event, Ivanka was spotted in a double-breasted black and white coat layered over tall black slouchy boots; the pointed-toe style came set atop a stiletto heel with a slouchy finish.

When it comes to shoes, the former footwear head herself oftentimes prefers pumps for her more formal occasions; her go-to picks come from brands like Gianvito Rossi along with Jimmy Choo and Burberry. Though she wasn’t wearing shoes during her balcony outing today, Ivanka launched her own clothing and footwear line in 2011 before shuttering in 2018.

Beyond her beachy attire, the former advisor to the president also has stepped out in more affordable picks from Rothy’s flats and Gola for J.Crew sneakers. When it comes to fashion and apparel, Ivanka Trump herself also typically favors major labels like Chanel, Dolce & Gabbana and Oscar de la Renta; she also teams her go-to heels to designs from the likes of Brandon Maxwell and Altuzarra.

Shop tank dresses for your own warm-weather outings ahead.

Click through the gallery to discover more of Ivanka Trump’s former footwear styles over the years.