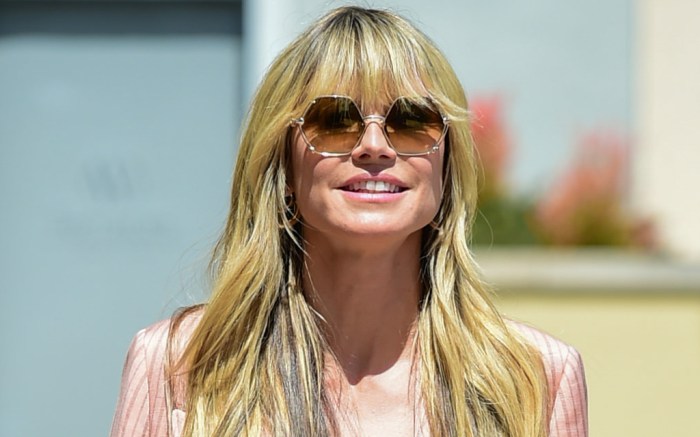 Heidi Klum kicked off an already bold style streak this week as she returned to set for the upcoming season of “America’s Got Talent.”

Filming in Los Angeles, the series’ judge arrived on the scene in the silkiest pinstripe suit yesterday. The pink number, which came layered over a bright orange tee, blended together two of spring’s biggest trends: suiting up and dressing down.

Suiting up has become the new normal amongst celebrity style trends thus far in 2021, potentially led in part by the first-ever female Vice President Kamala Harris and her neverending lineup of perfectly tailored power suits. Dressing down, though, too is a common occurrence modeled through pajama-inspired silky pants and shirts as well as through loungewear and athleisure trends.


Bringing a third trend into the mix, Klum finished off her standout attire in a set of surprisingly flat sandals. The T-strap, thong-toe design featured brown leather uppers with a smooth base and a subtle block heel.

Thong-toe footwear returned to the celebrity scene last year as one of spring and summer’s biggest trends and is expected to stick around in 2021. Be it classic flip-flops or thong-toe heels, the minimalistic silhouette falls in line with a ’90s-inspired revitalization of fashion, as seen with shoes like square-toe styles and pops of neon color. Stars like Chrissy Teigen along with Meryl Streep and Gabrielle Union amongst other major names are continuing to support the trend in even cooler temperatures.


As for Klum herself, 2020 was a major year for the model; she completed her bout serving as a judge on her NBC talent series as well as the co-host of Amazon Prime’s series “Making the Cut” alongside her former “Project Runway” co-star Tim Gunn; the competition series profiled up and coming designers with winning styles added to shop live every week to Amazon. She also has served as the host and executive producer of “Germany’s Next Topmodel” since 2006.

Ease into the thong-toe sandal trend like Heidi Klum in these shoes inspired by her look.

Click through the gallery to check off more of Heidi Klum’s memorable looks over the years.