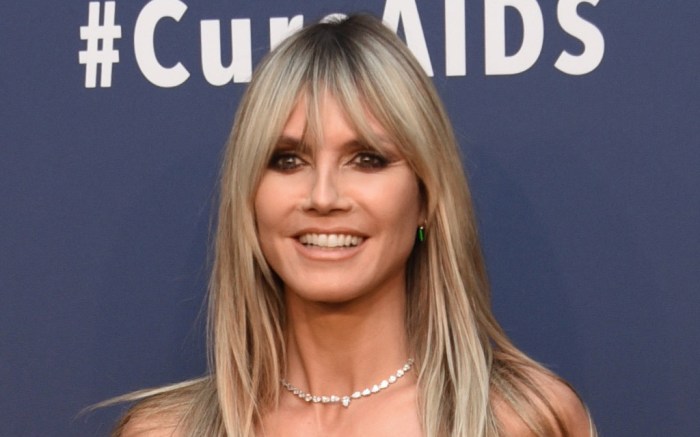 The model, who serves as one of the judges for the series, went bold for last night’s episode in a strapless feather-coated dress; the coral number also featured a cinched satin waistband, bearing resemblance to designs from Jenny Packham and Ralph & Russo.

On her feet, Klum continued the glam appeal of her look with see-through pumps; the pointed-toe pair came set atop a stiletto heel with a securing ankle strap and a studded finish.

As for Sofia Vergara, the series’ judge took the stage alongside Klum and her fellow co-stars in a bright pink dress on Tuesday, tapping Alex Perry for the design. The silhouette featured a sweetheart neckline with off-the-shoulder sleeves and a form-fitting midi hemline.

Though they couldn’t be seen on Instagram, Vergara completed the ensemble with holographic silver platform sandals set atop a tall heel and rounded toe.

2021 has been a major year for Heidi Klum herself already; she is currently serving as a judge on her NBC talent series as well as the co-host of the second season of her Amazon Prime’s series, “Making the Cut,” alongside her former “Project Runway” co-star Tim Gunn; the competition series profiled up and coming designers with winning styles added to shop live every week to Amazon. Klum herself also has served as the host and executive producer of “Germany’s Next Topmodel” since 2006.

Check out the gallery for more of Heidi Klum’s statement style over the years.