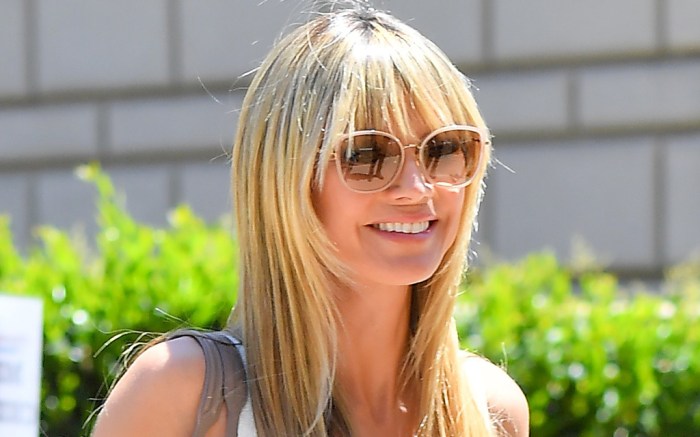 Heidi Klum channeled bohemian style for her latest arrival ensemble on the set of “America’s Got Talent.”

Continuing her streak of chic outfits for the competition series, the German-American model went boho-chic on Monday in a flowing white dress. The sleeveless design included a soft fabric, frayed hem and a chunky snakeskin belt finish.

On her feet, the series’ judge boosted her 5-feet-9-inches frame with teetering snakeskin mules. The double-strap style featured a sleek patent leather finish with a peep-toe front, all set atop a round toe and a thin stiletto heel; the lift appeared to measure close to 5 inches in height, too.


Like her white dress today, Heidi Klum knows how to turn a white statement piece into a bold style moment. For example, just last week the media personality surfaced one of spring’s biggest styling trends at “America’s Got Talent.”

Hitting the studio in bold fashion, Klum glowed in all-white attire from her sunglasses to her chic footwear. The main feature of the outfit came in the form of a loose-fitting boiler suit complete with cargo pockets, a belted waist and a button-up closure.

To elevate the look further, she zipped up a set of glowing white boots. The style hit just above the ankle and featured sleek white uppers, all set atop a pointed toe and a cone-shaped heel. A staple in the television personality’s closet, white booties provide an effortlessly chic touch to any ensemble with a brightening effect when compared to darker colorways.

Go bold like Heidi Klum with these snakeskin heels inspired by her look.

Click through the gallery to check out more of Heidi Klum’s statement style over the years.