Heidi Klum Is Edgier Than Ever in a Moto Jacket, Leather Mini Skirt & Snakeskin Pumps for Date Night 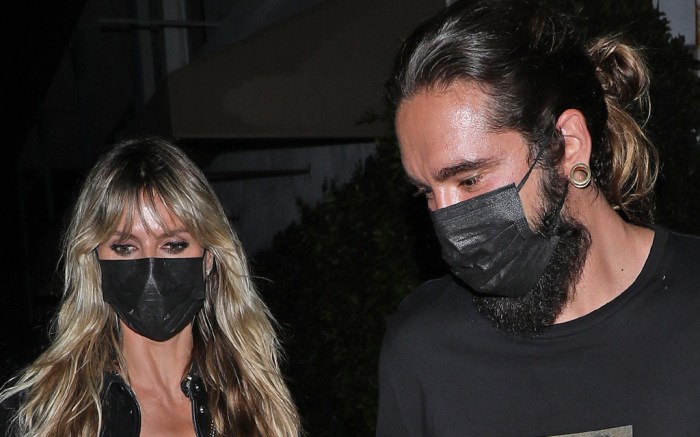 Heidi Klum broke out her edgy style for a date night with her husband, musician Tom Kaulitz.

On Thursday, the “America’s Got Talent” judge joined her other half for dinner at celeb-favorited spot Giorgio Baldi in Santa Monica, Calif. For the outing, Klum went moto-chic in a leather shirt-jacket and coordinating mini skirt; she then contrasted the sleeker pieces with a black animal-coated blouse.

A sleek piece of leather attire has become one of the biggest trends this spring — and now this summer, too. Whether in the form of a jacket, skirt or, in Klum’s case, both, the effortlessly cool material offers an easy way to add a glam yet edgy touch to all looks, as exemplified by the likes of Katie Holmes, Kylie Jenner, Zoe Kravitz and more.


Continuing the edgy appeal of her own look, Klum topped off her ensemble with a pair of slithering pumps. The snakeskin heels featured a pointed-toe design with a rounded vamp and a stiletto lift.


2021 has been a major year for Heidi Klum already; she is currently serving as a judge on her NBC talent series as well as the co-host of the second season of her Amazon Prime’s series, “Making the Cut,” alongside her former “Project Runway” co-star Tim Gunn; the competition series profiled up and coming designers with winning styles added to shop live every week to Amazon. Klum herself also has served as the host and executive producer of “Germany’s Next Topmodel” since 2006.

Go bold like Heidi Klum in these snakeskin heels.

Click through the gallery for more of Heidi Klum’s statement style over the years.