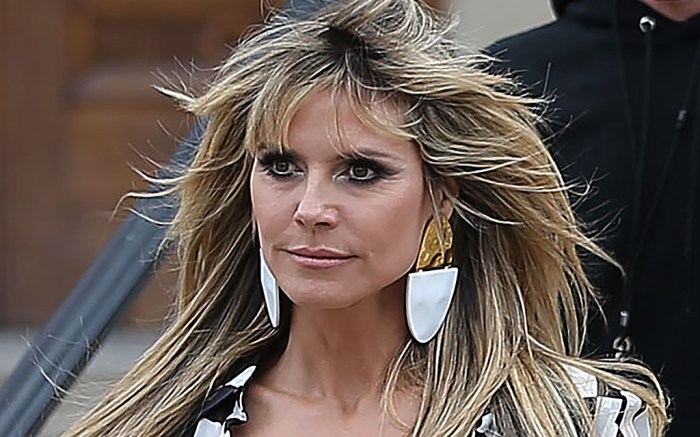 Heidi Klum brought her bold style to the set of “Jimmy Kimmel Live!” this week and it did not disappoint.

The model joined the late-night show on Tuesday in a full Dolce & Gabbana ensemble, kicking off with a cutout black blazer complete with edgy gold zippers across the sleeves. With help from stylists Rob Zangardi and Mariel Haenn, Klum then layered in a sheer red turtleneck top and a sequined bralette to match her statement-making red metallic pants; similar bottoms from the brand retail for over $1,100 at Farfetch.

Suiting up has become the new normal amongst celebrity style trends thus far in 2021, potentially led in part by the first-ever female Vice President Kamala Harris and her neverending lineup of perfectly tailored power suits. Stars including Amanda Seyfried, Christina Aguilera, Tracee Ellis Ross and more have already pulled off the trend this season with more bold looks to come.

As for footwear, Klum continued the monochrome appeal of her ensemble in a matching set of red stilettos. The lifted sandals appeared to measure close to 5 inches in height with a securing metallic strap across the toe and ankle.

Flip through the gallery to see more of Heidi Klum’s edgiest looks over the years.