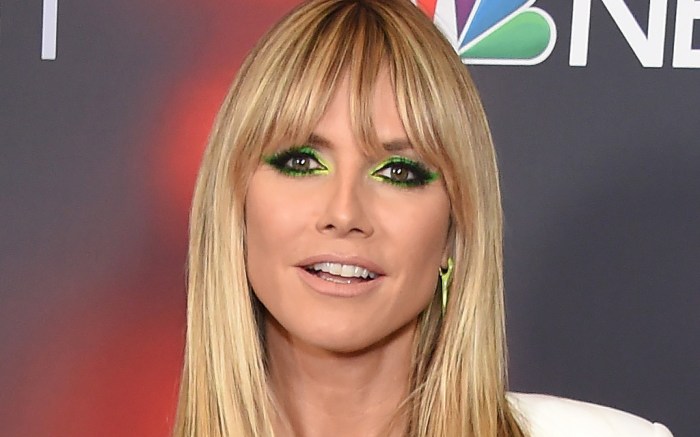 Supporting the haircare artist, Klum arrived on the yellow carpet in all-black attire. The model opted for a mini, lace-paneled romper to start the look off, layering it under a coordinating blazer with similar sheer fabric across the sleeves. To elevate the look further, Klum slipped on a pair of patent leather booties set atop a towering heel and lifted platform base.

Earlier this week, the supermodel channeled “Cats” for Halloween this year, breaking out a plunging bodysuit for the occasion. The black lace-up piece featured a furry waistline and a coordinating tail as well as a fuzzy-eared hood. Klum completed her look with fishnet gloves and tights, all tucked into black furry boots. To give the costume a real edge, the media personality also donned a bright red wig and full face paint.

Before her TV stardom, the German-American personality kicked off her career modeling for the likes of Jordache, Victoria’s Secret and Sports Illustrated as well as founded her own swimwear and intimates lines. In her shoe closet, you can find everything from towering Christian Louboutin pumps to embellished sandals as well as unconventional fish-style rubber slippers.

Check out the gallery for more of Heidi Klum’s red carpet style evolution.