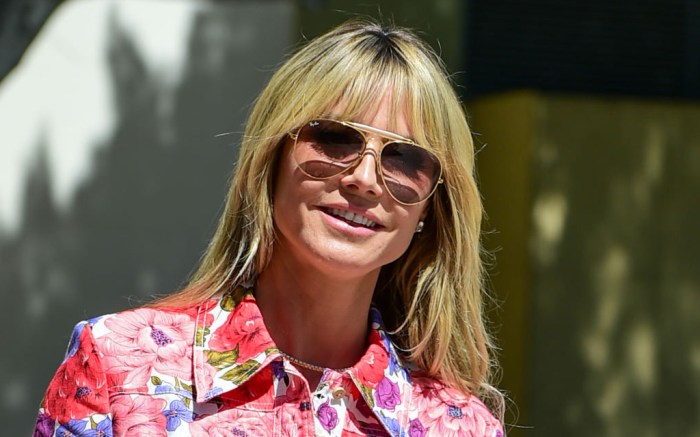 Heidi Klum brought her bright style to the set of “America’s Got Talent” this week.

The former model arrived for filming in a standout jumpsuit, tapping into spring trends with it’s floral-coated design and retro-chic silhouette. The ensemble also popped further with Klum’s choice of a rare Hermès Birkin bag complete with a pink embossed shell and Ray-Ban sunglasses.

Continuing the bright elements of her attire, Klum kept the bold theme going with her choice of neon heels. The Barbie pink sandals featured patent leather straps with a chunkier fit across the ankle and a subtle PVC hold behind the heel. Set atop a 4-inch lift, the design also includes a red lining in a signature Christian Louboutin touch. The silhouette, titled the Jonatina sandal, retails for $795 at MyTheresa.com.


On Sunday, Klum arrived once more on set for the talent competition in a different style of ensemble. Repping her title of a ’90s supermodel, the series’ judge opted for an oversize tee layered with ripped skinny jeans and the sleekest pointed-toe booties.

As for Heidi Klum herself, 2020 was a major year for the model; she completed her bout serving as a judge on her NBC talent series as well as the co-host of Amazon Prime’s series “Making the Cut” this year alongside her former “Project Runway” co-star Tim Gunn; the competition series profiled up and coming designers with winning styles added to shop live every week to Amazon. She also has served as the host and executive producer of the aforementioned “Germany’s Next Topmodel” since 2006.

Flip through the gallery to discover more of Heidi Klum’s bold style over the years.