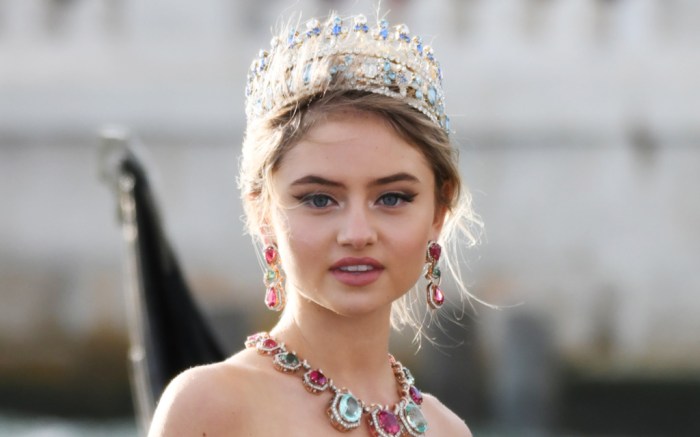 Leni Klum made her runway debut for Dolce & Gabbana this weekend, channeling her mom Heidi Klum with ease.

The 17-year-old star strutted down the catwalk for the brand’s Alta Moda presentation in Venice, Italy, on Sunday, modeling the collection for a slew of celebrities in the crowd including Kourtney Kardashian and Jennifer Lopez. For the show, the teenager donned a strapless stretch double satin corset dress and skirt in a bright shade of blue.

Her outfit also included an unmissable gem-coated necklace as well as a tall coordinating crown. The finishing touch of the runway look then came in the form of glittering pointed-toe pumps with a stiletto heel and T-strap fit.

This week in Venice in fact has been one of Leni’s biggest fashion debuts to date. The young star twinned with her mom and fellow model in a series of statement looks throughout the weekend, including a standout moment in disco ball-inspired dresses.

Both mother and daughter tapped Dolce & Gabbana again for the ensembles and rounded out their looks with glittering metallic sandals.

2021 has been a major year for Heidi Klum herself already; she is currently serving as a judge on her NBC talent series as well as the co-host of the second season of her Amazon Prime’s series, “Making the Cut,” alongside her former “Project Runway” co-star Tim Gunn; the competition series profiled up and coming designers with winning styles added to shop live every week to Amazon. Klum herself also has served as the host and executive producer of “Germany’s Next Topmodel” since 2006.

Click through the gallery for more of Heidi Klum’s own glam style over the years.