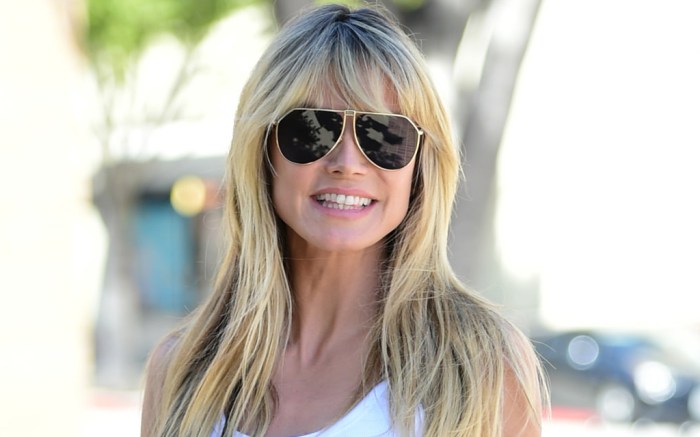 Heidi Klum sent a strong message with her outfit yesterday as she arrived on set for “America’s Got Talent.”

Rocking a crop top that “Always Be Kind,” the talent competition judge also pulled off an effortless frame-lengthening trick during the outing with a little help from her pants. The black pair featured the ultimate high-rise fit, a hack that gives the illusion of longer legs and a shorter torso.

To elevate look further, the model boosted her 5-feet-9-inches frame with stiletto pumps. The sleek white heels glowed with pointed-toe pumps and a rounded vamp to match.


Earlier in the week, Klum showed off another side of her style as she arrived once more for the talent series.

Filming in Los Angeles, the star arrived on the scene in the silkiest pinstripe suit yesterday. The pink number, which came layered over a bright orange tee, blended together two of spring’s biggest trends: suiting up and dressing down.

Bringing a third trend into the mix, Klum finished off her standout attire in a set of surprisingly flat sandals. The T-strap, thong-toe design featured brown leather uppers with a smooth base and a subtle block heel.

As for Klum herself, 2020 was a major year for the model; she completed her bout serving as a judge on her NBC talent series as well as the co-host of Amazon Prime’s series “Making the Cut” alongside her former “Project Runway” co-star Tim Gunn; the competition series profiled up and coming designers with winning styles added to shop live every week to Amazon. She also has served as the host and executive producer of “Germany’s Next Topmodel” since 2006.

Make your outfit glow like Heidi Klum’s in these bright white heels.

Click through the gallery to discover more of Heidi Klum’s top style moments over the years.