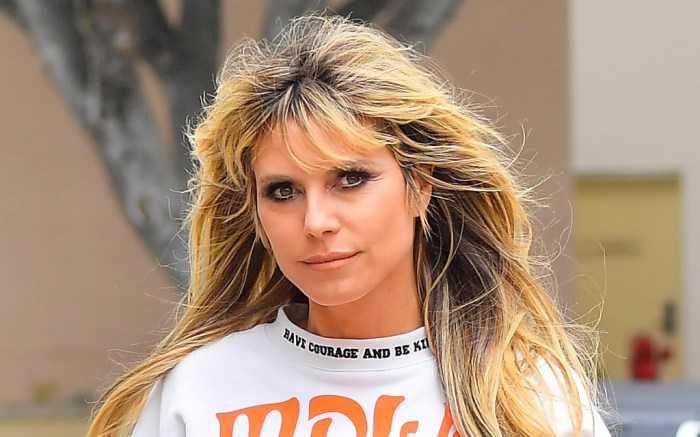 Heidi Klum brought the 1980s to the set of “America’s Got Talent” this weekend in bold fashion.

The model channeled retro-chic style as she made her way to filming in the ultimate cropped sweatshirt and exposed black bralette. The pieces came matched to slick leather pants, offering up an ’80s-inspired rockstar edge for the outing.

A sleek piece of leather attire has become one of the biggest trends this winter — and now this spring, too. Whether in the form of a jacket, skirt or, in Klum’s case, pants, the effortlessly cool material offers an easy way to add a glam yet edgy touch to all looks, as exemplified by the likes of Katie Holmes, Kendall Jenner, Zoe Kravitz and more.


The edgy elements of Klum’s own look continued into her choice of footwear. The talent series judge slipped on a pair of towering pointed-toe pumps coated in a similar slick leather finish, all set atop a heel that appeared to measure around 4 inches in height.

Elevate your style in these sleek heels inspired by Heidi Klum.

Click through the gallery to check out more of Heidi Klum’s statement style over the years.