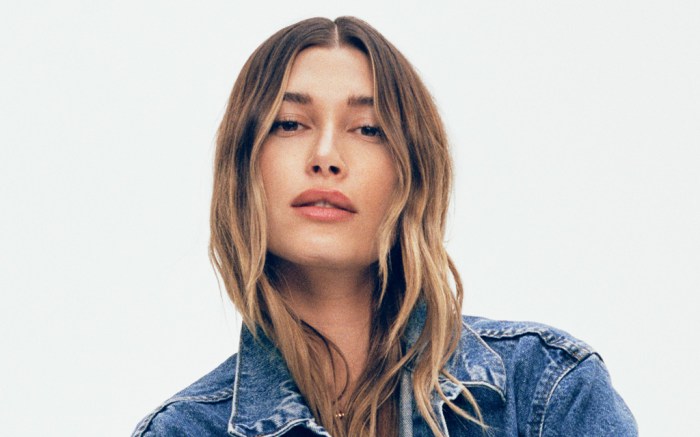 Hailey Baldwin joined forces with Levi’s for its latest 501 Originals campaign in honor of 501 Day.

Honoring the 148th birthday of the blue jean on May 20, Baldwin posed in new pieces from the classic denim brand in a campaign that also features the likes of Jaden Smith, Naomi Osaka, Barbie Ferreira and more.

For the photoshoot, the model herself posed in a summery twist on a Canadian tuxedo; her outfit layered a $98 jean jacket over $50 cutoff denim shorts, all matched to a soft $30 tank top and the chunkiest white sneakers.

In another shot for the campaign, Baldwin posed alongside Jaden Smith in pair of retro-chic jeans and a tie-dye striped tank top. This time around, the influencer decided on a pair of sleek white brogues courtesy of Dr. Martens; similar pairs retail for $110 on the brand’s website.

Beyond impressive street style, Baldwin’s experience in the fashion industry extends to all sides. For Levi’s in particular, the media personality previously worked with the brand to star in its summer ’20 campaign alongside Smith and most recently joined the denim label to help launch its SecondHand upcycling initiative. She has also appeared in marketing campaigns for brands such as Saint Laurent, Zadig & Voltaire, Ralph Lauren and Tommy Hilfiger. What’s more, in 2016, the A-lister joined forces with Ugg, starring in the label’s Classic Street Collection campaign for fall ’16.

The new Superga ambassador‘s shoe closet also includes an eclectic mix beyond her ambassadorships. On top of her go-to Nike Air Force 1 sneakers, she has been spotted wearing sneakers from Chanel, Off-White and Nike x Fear of God collabs, as well as heels from Tabitha Simmons and Jimmy Choo. The media personality’s new go-to brands for shoes are Femme LA, Amina Muaddi and Bottega Veneta, falling in line with trending celeb-favorite styles from the labels that every “it” girl is wearing.

Click through the gallery for more of Hailey Baldwin’s edgy sneaker style over the years.