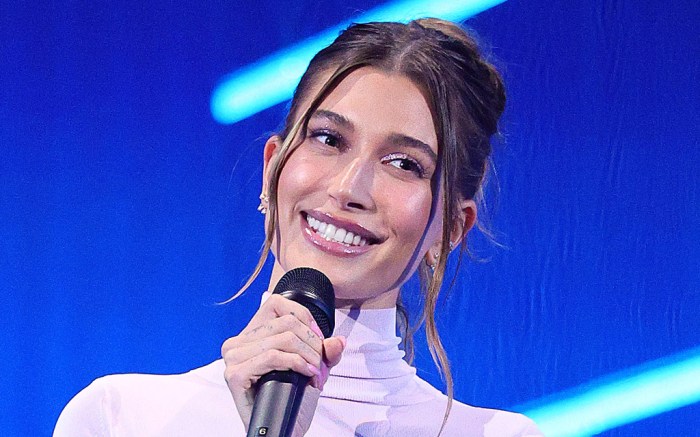 The model took the stage during the show in a soft pink number from Alaïa’s spring ’22 collection, complete with a turtleneck silhouette and stretched long sleeves. The fabric of the dress offers a statement-making sheer finish with perfectly-placed lined coverage underneath the bodice. Baldwin tapped her husband Justin Bieber’s stylist, Karla Welch, for the event, switching it up from her usual styling credits with Maeve Reilly.

To give the ensemble a monochrome appeal, Baldwin continued with her pink color scheme when it came to footwear. The media personality’s shoes highlighted a pointed-toe silhouette set atop a stiletto heel, all coated in pink satin fabric.

The finishing touch for the ensemble came in the form of a glittering gold anklet. Anklets became a must-have accessory throughout the 1990s and have since experienced a revival in tandem with a revitalization of major ’90s style trends, including square-toe footwear, mom jeans and platforms. You can find them on stars near and far including Saweetie, Heidi Klum, Kylie Jenner and Kelly Rowland.

Baldwin’s own experience in the fashion industry extends to all sides. The media personality worked with Levi’s for its summer ’20 campaign alongside Jaden Smith and most recently joined the denim brand for its annual 501 Day event. She has also appeared in campaigns for brands such as Guess, Zadig & Voltaire, Ralph Lauren and Tommy Hilfiger. What’s more, in 2016, the A-lister joined forces with Ugg, starring in the label’s Classic Street Collection campaign for fall ’16.

Click through the gallery for more of Hailey Baldwin’s elevated style over the years.