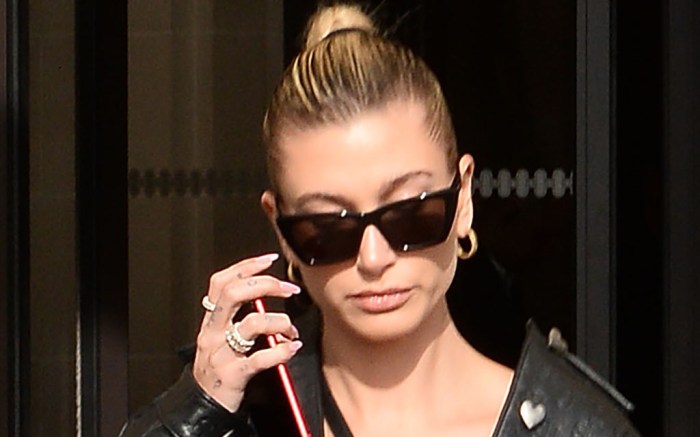 Hailey Baldwin brought the 2000s into the modern day with a little help from stylist Maeve Reilly.

The model appeared on Reilly’s Instagram last night in a glam behind-the-scenes look from her YouTube channel. Going casual-chic, Baldwin teamed a crystal-embellished Area scarf top with retro cargo pants from Hyein Seo; similar satin tops retail on sale from $270 to $450 at Net-a-Porter. Cargo pants, as well as retro-chic scarf tops, are both experiencing a moment on the fashion scene amidst revitalizations of the late 1990s and early 2000s trends such as combat boots and low-rise bottoms.

The final touch for Baldwin’s look was a puffy set of black and white skate-style sneakers.

At the end of May, Baldwin took a few style tips from her parents as she grabbed dinner with her husband Justin Bieber.

As the couple dined at Wally’s in Beverly Hills, Calif., the media personality herself opted for a chic outfit combo in a layered leather jacket and black crop top with 1990s-inspired denim. Mom jeans made a comeback in 2019 and have continued to pop off into 2021, favored by everyone from Kendall Jenner and Sofia Richie to Tracee Ellis Ross and Jennifer Garner. To top off her own retro moment, Baldwin herself finished off the outfit with a bright green $2,790 pouch bag from Bottega Veneta.

For the outing, the media personality rounded out the look with a major trend from a few years back: dad shoes. Earning their name for their oversize nature and chunky appeal, these sneakers took over the celebrity style scene in 2018 with a little help from Gigi Hadid, Jaden Smith, Balenciaga and more major power players.

While Hailey’s actual father, actor Stephen Baldwin, may have his own choice of footwear, the 24-year-old star decided on an all-white pair courtesy of New Balance. Her silhouette, in particular, is the classic New Balance 2002R, a style featuring cushiony Abrozb midsoles and shock-absorbing outsoles at a price tag of $140.

Baldwin’s own experience in the fashion industry extends to all sides. The media personality worked with Levi’s to star in their summer ’20 campaign alongside Jaden Smith and most recently joined the denim brand for its annual 501 Day event. She has also appeared in marketing campaigns for brands such as Guess, Zadig & Voltaire, Ralph Lauren and Tommy Hilfiger. What’s more, in 2016, the A-lister joined forces with Ugg, starring in the label’s Classic Street Collection campaign for fall ’16.

The new Superga ambassador‘s shoe closet also includes an eclectic mix beyond her ambassadorships. On top of her go-to Nike Air Force 1 sneakers, she has been spotted wearing sneakers from Chanel, Off-White and Nike x Fear of God collabs, as well as heels from Tabitha Simmons and Jimmy Choo. The media personality’s new go-to brands for shoes are Amina Muaddi and Bottega Veneta, falling in line with trending celeb-favorite styles from the labels that every “it” girl is wearing.

Channel Hailey Baldwin in these sneakers inspired by her look.

Click through the gallery for more of Hailey Baldwin’s sneaker style over the years.