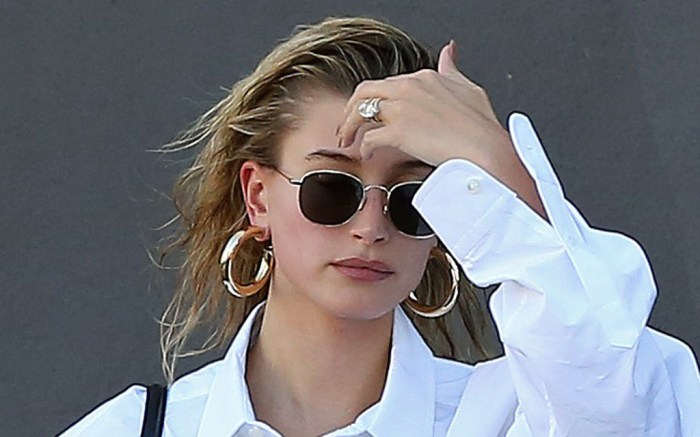 Hailey Baldwin gave her twist on one of fashion’s most infamous styling moves this week with a little help from her stylist Maeve Reilly.

Reilly showed off looks from their latest styling series on Wednesday, debuting Baldwin’s take on a Canadian Tuxedo. The ensemble layered an oversize denim shirt jacket with a white crop top and light-wash mom jeans to tout.

To give the look a touch of her own classic taste, Baldwin then laced up a set of bold orange and white kicks. The neon sneakers feature a recognizable arrow design across the lateral side, a signature move of Virgil Abloh’s Off-White brand. Titled the Out of Office silhouette, the sneaker highlighted perforated leather toes with tangerine overlays and a branded hangtag for a finishing touch.

Baldwin’s pair in particular features a personalization across the midsole, branded with her name in signature Helvetica font and quotes. You can shop the media personality’s choice of footwear for $515 at Farfetch.com.

As for Baldwin herself, the model’s experience in the fashion industry extends to all sides. The media personality worked with Levi’s to star in their summer ’20 campaign alongside Jaden Smith and most recently joined the denim brand to help launch its SecondHand upcycling initiative. She has also appeared in marketing campaigns for brands such as Guess, Zadig & Voltaire, Ralph Lauren and Tommy Hilfiger. What’s more, in 2016, the A-lister joined forces with Ugg, starring in the label’s Classic Street Collection campaign for fall ’16.

The new Superga ambassador‘s shoe closet also includes an eclectic mix beyond her ambassadorships. On top of her go-to Nike Air Force 1 sneakers, she has been spotted wearing sneakers from Chanel, Off-White and Nike x Fear of God collabs, as well as heels from Tabitha Simmons and Jimmy Choo. The media personality’s new go-to brand for shoes is Bottega Veneta, falling in line with trending celeb-favorite styles from the label that every “it” girl is wearing.

Click through the gallery to find more of Hailey Baldwin’s bold sneaker style over the years.