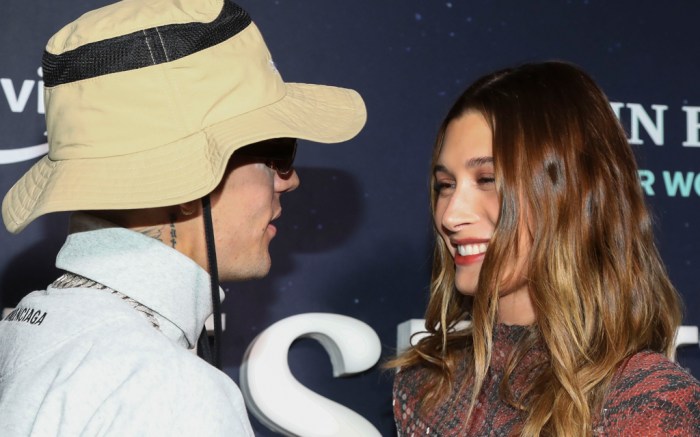 Hailey Baldwin brought down the house as she attended the premiere of her husband’s new film.

Taking place at the Edge in New York, the model was a supportive wife as they previewed the “Justin Bieber: Our World” for Amazon Prime Video on Tuesday. For the occasion, Baldwin stunned in a high-neck and high-slit minidress coated in a red snakeskin sequins. Her “Baby” singer counterpart went more casual for the premiere in a turtleneck sweater, wide-leg jeans and a fishing hat.

As for footwear, Baldwin kept with her usual taste by tapping Femme LA for her sandals of the evening. The brown pair comes equipped with a thin securing strap across a pointed toe as well as a lace-up wrap hold around the ankle. Femme is a vegan label making waves for its buzzy heels, favored by the likes of Ashley Graham, Jennifer Lopez and Megan Fox amongst other huge names.

Baldwin’s pick, in particular, retails for just $180 at Femme.LA.

Baldwin’s own experience in the fashion industry extends to all sides. The media personality worked with Levi’s for its summer ’20 campaign alongside Jaden Smith and most recently joined the denim brand for its annual 501 Day event. She has also appeared in campaigns for brands such as Guess, Zadig & Voltaire, Ralph Lauren and Tommy Hilfiger. What’s more, in 2016, the A-lister joined forces with Ugg, starring in the label’s Classic Street Collection campaign for fall ’16.

Take inspiration from Hailey Baldwin in these sleek brown sandals.

Click through the gallery to find more of Hailey Baldwin’s best heeled looks over the years.