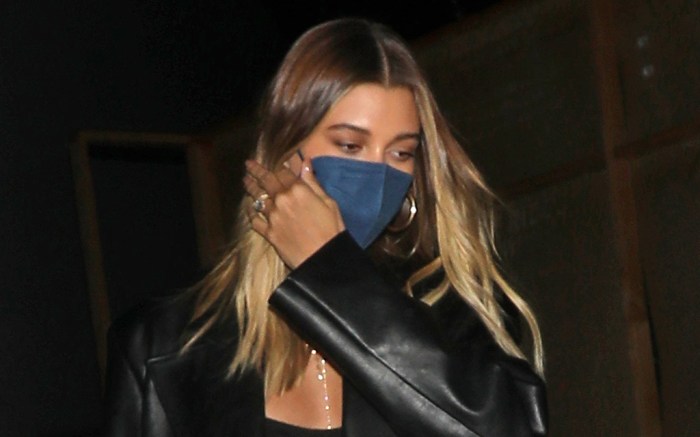 Hailey Baldwin tackled date night style with ease this weekend as she joined her husband Justin Bieber for an evening on the town.

The model herself opted for a classic look in a take on the little black dress in Los Angeles; Baldwin picked the number from up-and-coming label AZ Factory with similar silhouettes retailing for $790 at Net-a-Porter. Titled the MyBody stretch-knit minidress, designer Alber Elbaz told the online boutique that his AZ Factory line “is a reset in all senses of the word – he created his debut ‘MyBody’ collection to sculpt and empower women of all shapes and sizes.”

To highlight her own version of the dress, Baldwin herself continued the all-black color scheme in ankle-strap pumps with a classic pointed-toe silhouette.

Earlier in the weekend, the media personality joined her husband for a star-studded series of events in Atlanta including Migos rapper Quavo’s Legends Basketball Game. During the busy weekend, Baldwin herself decided on chic attire in a Prada skirt, R13 jacket and vegan Femme LA heels as styled by Maeve Reilly.

Hailey Baldwin’s experience in the fashion industry extends to all sides. The media personality worked with Levi’s to star in their summer ’20 campaign alongside Jaden Smith and most recently joined the denim brand to help launch its SecondHand upcycling initiative. She has also appeared in marketing campaigns for brands such as Guess, Zadig & Voltaire, Ralph Lauren and Tommy Hilfiger. What’s more, in 2016, the A-lister joined forces with Ugg, starring in the label’s Classic Street Collection campaign for fall ’16.

The new Superga ambassador‘s shoe closet also includes an eclectic mix beyond her ambassadorships. On top of her go-to Nike Air Force 1 sneakers, she has been spotted wearing sneakers from Chanel, Off-White and Nike x Fear of God collabs, as well as heels from Tabitha Simmons and Jimmy Choo. The media personality’s new go-to brand for shoes is Bottega Veneta, falling in line with trending celeb-favorite styles from the label that every “it” girl is wearing.

Click through the gallery to see more of Hailey Baldwin’s on-trend style over the years.