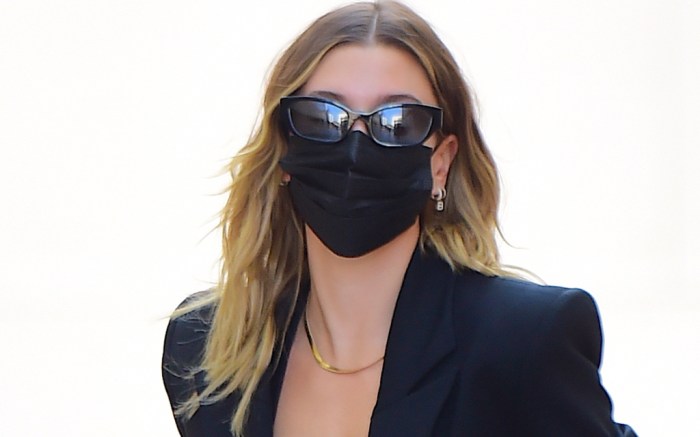 Hailey Baldwin gave her take on the power suiting trend this week as she arrived at a business meeting in Los Angeles.

Stepping out on Wednesday, the model tapped the Attico’s newly released spring ’21 collection for an all-black ensemble; the suit consisted of a single-button dipping $1,619 blazer layered over a black bralette and coordinating $1,020 flare-hem trousers.


As for Baldwin, the media personality decided to bring her own twist to the trend with her choice of bold footwear. The neon sandals highlighted a trendy square-toe silhouette set atop an architectural block heel; featuring a peep-toe rounded vamp as well, the design bears resemblance to the Attico’s Devon mules. The bright shoes are balanced with a 4.3-inch lift and retail for $729 at Farfetch.


Celebrity style fans may recognize the eye-catching shoes from another major star’s ensemble this week: Kylie Jenner. The beauty mogul also modeled the bright heels from the Attico along with a silky green dress from the brand’s collection on Instagram on Monday, giving her take on monochrome styling.

The Attico launched in 2016 out of Milan and quickly rose to prominence for its standout designs and ever-chic silhouettes. From ankle-wrap pumps to feather-coated attire, influencers far and wide continue to flock to the Italian brand’s pieces for both formalwear and off-duty street style. In addition to a hit collab with Jordan Brand in February 2020, you can find the label’s designs on the likes of Dua Lipa, Chrissy Teigen and Céline Dion.

As for Baldwin herself, the model’s experience in the fashion industry extends beyond stylish off-duty wear. The media personality worked with Levi’s to star in their summer ’20 campaign alongside Jaden Smith and most recently joined the denim brand to help launch its SecondHand upcycling initiative. She has also appeared in marketing campaigns for brands such as Guess, Zadig & Voltaire, Ralph Lauren and Tommy Hilfiger. What’s more, in 2016, the A-lister joined forces with Ugg, starring in the label’s Classic Street Collection campaign for fall ’16.

The daughter of Stephen Baldwin‘s shoe closet also includes an eclectic mix beyond her ambassadorships. On top of her go-to Nike Air Force 1 sneakers, she has been spotted wearing sneakers from Chanel, Off-White and Nike x Fear of God collabs, as well as heels from Tabitha Simmons and Jimmy Choo. The media personality’s new go-to brand for shoes is Bottega Veneta, falling in line with trending celeb-favorite styles from the label that every “it” girl is wearing.

Looking for a green statement shoe like Hailey Baldwin and Kylie Jenner? Try out these more wallet-friendly pairs for size.

Click through the gallery to check out more of Hailey Baldwin’s boldest looks over the years.