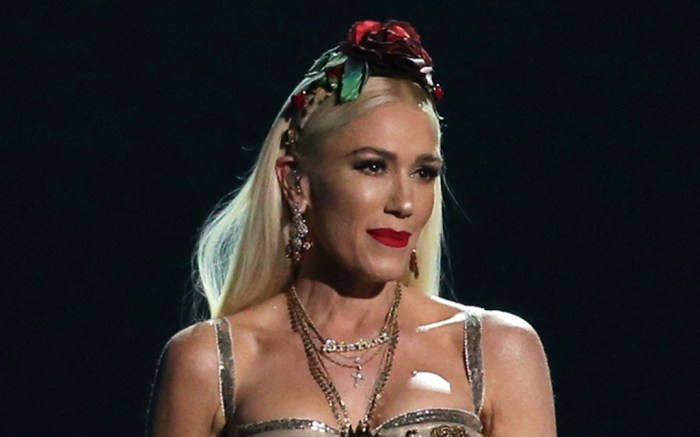 The musician joined rapper Saweetie for a special performance of the remix of “Slow Clap,” showing off their individually bold tastes for the show. Stefani herself opted for a retro-chic look as she layered a chain-linked mesh top over a black bralette and fishnet tights; the singer then incorporated a coordinating red leather jacket and matching parachute-style pants.

The finishing touch for Stefani’s statement-making look came with her choice of footwear, an elevated black patent leather boot.

As for Saweetie, the “Tap In” rapper decided on all-blue attire to counter her co-stars look. The outfit highlighted a glittering bustier top and matching rhinestone-coated sweats, all matched to green and blue Air Jordans. The unique design comes courtesy of Aleali May, a world-renowned stylist and model who helped the Swoosh brand drop the Air Jordan 1 Zoom High “Califia” colorway in April.

As for Gwen Stefani herself, when it comes to her looks both on and off the stage, her style can be described as punk rock-chic, always including a twist of glam. Whether she’s in Sophia Webster butterfly sandals or Crocs camouflage clogs, the “Hollaback Girl” singer knows how to pull off an unexpected style. Her go-to brands include Gucci, Paris Texas, Vans and more when it comes to footwear.

Go edgy like Gwen Stefani in these sleek boots.

Check out the gallery for even more of Gwen Stefani’s edgiest looks throughout the years.