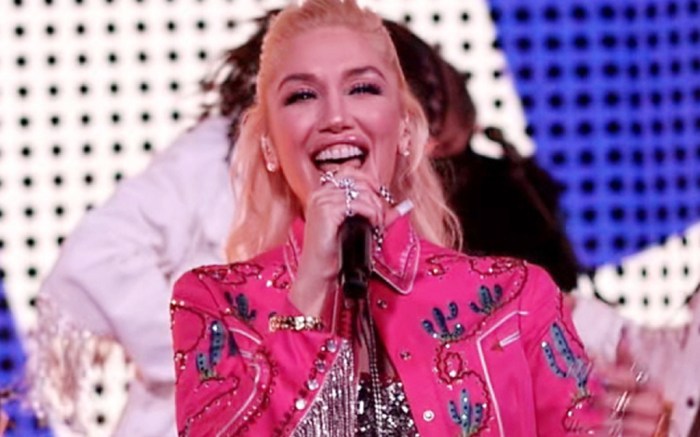 Gwen Stefani took the stage at “Jimmy Kimmel Live!” this week in a look that could not be missed.

“This shirt was a collaboration between our designers Lani + Daniel, @hbarcofficial, and @vera_vasiley,” wrote the brand Daniel x Diamond on Instagram. “The inspo was country Barbie. Cacti were a must… and then Vera’s imagination went wild in her Texas studio.”

As for footwear, the glittering elements continued into Stefani’s choice of combat boots. Giving a twist on the growing trend for spring, the singer’s pair include black laces, a lugged outsole and rhinestone-coated uppers.

Combat boots and hiking-inspired styles are the new norm amongst celebrity style trends, experiencing a revitalization along with a dew other silhouettes from the 1990s. From brands like Prada along with Bottega Veneta and Dr. Martens, these lug-sole boots offer ease of wear with an edgy-chic appeal. This season, you’ll spot utilitarian boots on the likes of Kylie Jenner, Cara Delevingne, Eva Longoia and more major stars.


Earlier in the week, the “Hollaback Girl” musician revealed more standout attire while promoting her new single, opting for an edgier appeal. Kicking off with a moto-style leather jacket and a knit bralette, the ensemble tapped DSquared2 for the wild combination; the outfit also included a unique leather jacket-inspired skirt with a chunk belt and fringed adornments.

The fringed elements continued into Stefani’s choice of footwear, modeling a knee-high silhouette atop a pointed-toe front and hidden stiletto heel; the pair retails for $1,675 on Farfetch.

When it comes to her looks both on and off the stage, Stefani’s style can be described as punk rock-chic, always including a twist of glam. Whether she’s in Sophia Webster butterfly sandals or Crocs camouflage clogs, the “Sweet Escape” singer knows how to pull off an unexpected style. Her go-to brands include Gucci, Paris Texas, Vans and more when it comes to footwear.

The No Doubt alumna also introduced her own line of apparel L.A.M.B. in 2003 and has partnered with L’Oreal, Revlon and Tura GX for campaigns and collaborative collections. Stefani’s career has also extended into the television world with a role judging new musical talent on “The Voice” once more this season alongside her new fiancé Blake Shelton as well as Kelly Clarkson and John Legend.

Shine like Gwen Stefani in glittering boots inspired by her performance style.

Click through the gallery to find more of Gwen Stefani’s boldest attire over the years.