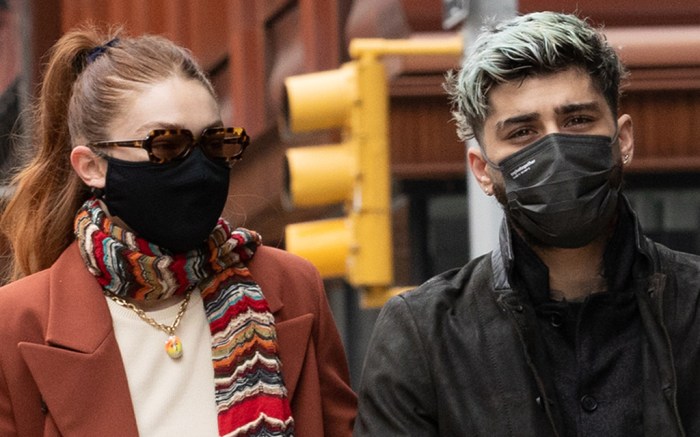 Gigi Hadid and Zayn Malik made a strong case today for their top-ranking couple style.

The duo stepped out for a walk with their daughter Khai this afternoon in New York, both rocking impressive off-duty ensembles during the stroll. Taking advantage of the nice weather, the supermodel mom opted for a clay orange peacoat, white tee, ripped Good American jeans and a statement scarf while her musician counterpart decided on darker attire; Malik’s look included a leather jacket, button-up shirt, jeans and a celeb-favorited Evolvetogether face mask.

As for footwear, Malik continued his edgy appeal in buckled leather boots set atop a subtle block heel. hadidd then selected a pair of sneakers from her favorite athletic label, Reebok. The long-time brand ambassador laced up Reebok’s Dual Court II sneakers from its chic collaboration with none other than Victoria Beckham. The shoes feature a stacked midsole with piped accents and mixed leather uppers, all for a retail price of $200 at Reebok.com.

When it comes to trends, Gigi herself tends to be on the breaking cusp of everything hot and in. Hadid previously starred in campaigns for the biggest names in fashion, from Versace to Tom Ford and Burberry and even Chanel, too. The model has walked runways in every season for the past few years in both womenswear and menswear collections, modeling cozy looks for Marni and wild designs for Jeremy Scott.

Click through the gallery to find more of Gigi Hadi’s best street style looks over the years.