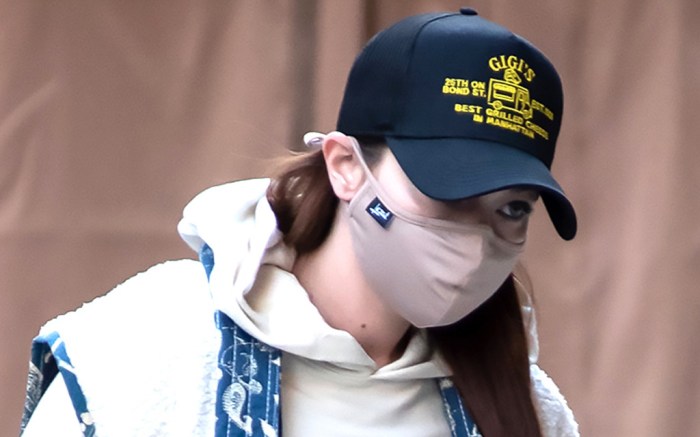 Gigi Hadid gave the 2000s a modern-day revitalization with ease as she returned home in comfortable style this week.

The supermodel appeared back at her apartment in SoHo, New York on Monday in a coordinating sweatshirt and sweatpants set layered under a fuzzy paisley denim vest. The ensemble of course included a protective face mask and a retro-chic accessory: a custom trucker hat. The design features personalized elements as a party favor from her 26th birthday celebrations that took place over the weekend.

Sweatsuits, vests and trucker hats were a common sight decades ago as stars elevated their off-duty attire with bold tank tops and bandeau crop tops amongst other major trends.


To continue the peak comfy ensemble, the media personality rounded out her look with every celebrity’s favorite off-duty boot brand: Ugg. Like her retro hat, Ugg boots were a staple at the start of the new millennium, oftentimes paired with denim mini skirts and cropped colorful leggings.

Hadid’s own pick comes in the form of the brand’s Tall II boots that retail for $200 on its website.


When it comes to trends, Gigi herself tends to be on the breaking cusp of everything hot and in. She previously starred in campaigns for the biggest names in fashion, from Versace to Tom Ford and Burberry and even Chanel, too. The supermodel has walked runways in every season for the past few years in both womenswear and menswear collections, modeling cozy looks for Marni and wild designs for Jeremy Scott.

In 2016, she became an ambassador for Tommy Hilfiger before working on a series of collaborative collections with the designer in 2017 and 2018. The new mom, who gave birth to her and Zayn Malik’s daughter in September 2020, also serves as an ambassador for Reebok, wearing endless sneakers and athleisure styles in the brand’s campaigns, in addition to partnering with jewelry brand Messika.

Click through the gallery to find more of Gigi Hadid’s best street style looks over the years.