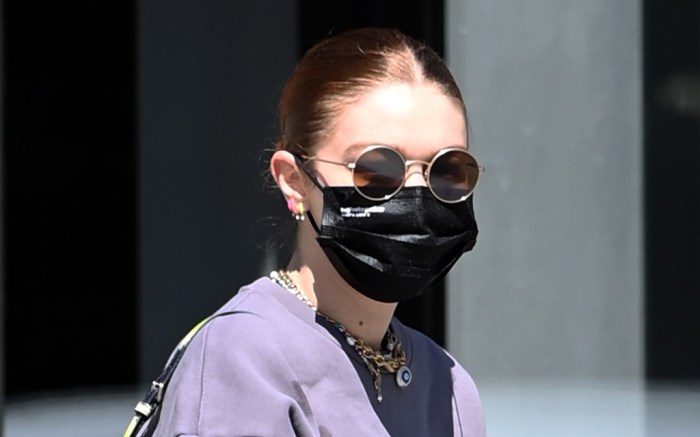 Gigi Hadid brought her unbeatable model street style out on the town this afternoon for a lunch date with her newborn daughter, Khai, and younger sister Bella Hadid.

The trio stepped out in New York today for a bite to eat in chic fashion as Gigi opted for a monochrome sweatshirt and biker shorts combination; her outfit also included a celeb-favorited Evolvetogether face mask.


As for Gigi, she finished off her own biker shorts moment with sneakers courtesy of Versace. Titled the Chain Reaction Baroque sneakers, the kicks come set atop a cloud-like midsole with neon uppers and translucent overlays. You can shop similar colorways from the Italian label for $995 at Farfetch.

Gigi and Versace have maintained a strong relationship throughout the model’s career. In March, in fact, she returned to the runway for the first time since giving birth for its fall’ 21 virtual show and generated high levels of buzz. According to marketing platform Launchmetrics ‘s fall ’21 Fashion Week Insights report, Gigi’s three personal Instagram posts centering around the new Versace collection and show brought in a total of $3.3 million worth of Media Impact Value.


When it comes to trends, Gigi herself tends to be on the breaking cusp of everything hot and in. She previously starred in campaigns for the biggest names in fashion, from Versace to Tom Ford and Burberry and even Chanel, too. The supermodel has walked runways in every season for the past few years in both womenswear and menswear collections, modeling cozy looks for Marni and wild designs for Jeremy Scott.

In 2016, she became an ambassador for Tommy Hilfiger before working on a series of collaborative collections with the designer in 2017 and 2018. The new mom, who gave birth to her and Zayn Malik’s daughter in September 2020, also serves as an ambassador for Reebok, wearing endless sneakers and athleisure styles in the brand’s campaigns, in addition to partnering with jewelry brand Messika.

Click through the gallery to find more of Gigi Hadid’s model street style over the years.