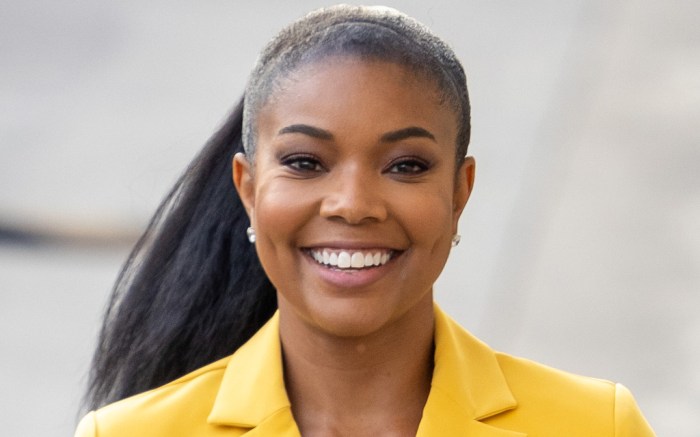 Gabrielle Union threw it back to the early 2000s as she channeled the classic R&B music videos from the decade.

Promoting her new New York & Co. collection on Instagram last night, the “Being Mary Jane” star went retro-chic in a faux-leather crop top — currently on sale for $56 discounted from $80. The sleek piece came matched to jogger-style jeans from the collab, also on sale for just $35 at NYandCompany.com.

On her feet, the throwback appeal continued with big toe sandals. Big-toe silhouettes became a celebrity-endorsed style in the summer of 2019 and have since continued to appear on the likes of Katy Perry, Lori Harvey and Katie Holmes amongst others. The style offers a laid-back appeal with the stability and familiarity of the 1990s, a common theme amongst “it” girl trends this season.

Union has been a longtime fan of big toe silhouettes, styling them this year for summer and fall. Last month, for example, the “Bring It On” actress arrived on set for a taping of “The View” in New York in a chunky knit cardigan with a tie-dyed hem; she then layered the piece over menswear-inspired brown pleated trousers and a drop-chain necklace.

Another trend experiencing a moment is big-toe sandals, as exemplified by Union on Tuesday. The media personality’s pair, in particular, included tan uppers with a contrasting black outsole, all balanced atop a square toe and lifted heel.

Union herself has had a lengthy partnership with New York & Co. that has led to successful collections, including a size-inclusive capsule for the holidays in December 2019. The media personality also serves as a brand ambassador for SensatioNail and served as a spokesperson for years for Neutrogena.

Click through the gallery for more of Gabrielle Union’s chic street style over the years.