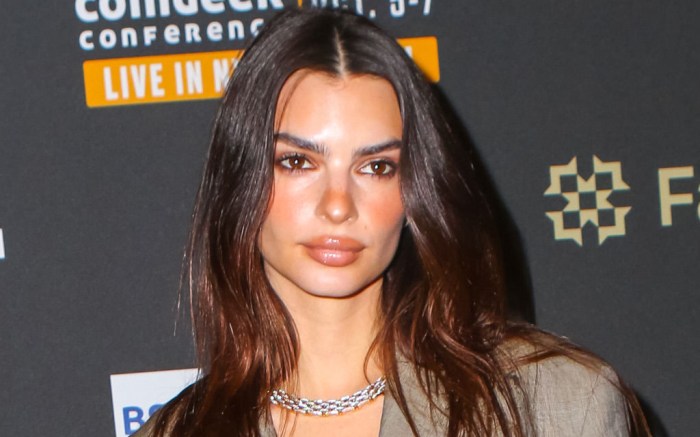 Attending a cocktail party for CoinGeek last night, the model stepped out in New York in a menswear-inspired suit. The oversize blazer and trousers set included a retro-chic oversized appeal with padded shoulders and a slouchy fit.

Blazer and suits have become the new normal amongst celebrity style trends thus far in 2021, potentially led in part by the first-ever female Vice President Kamala Harris and her neverending lineup of perfectly tailored power suits. Stars including Katie Holmes, Christina Aguilera, Tracee Ellis Ross and more have already pulled off the trend this season with more bold looks to come.

EmRata herself broke out another trending element when it came to footwear.

Continuing to be a breakthrough trend, thong-toe footwear returned to the celebrity scene last year as one of its biggest shoe styles and has since stuck around in 2021. Be it classic flip-flops or thong-toe heels, the minimalistic silhouette falls in line with the aforementioned ’90s-inspired revitalization of fashion. Stars like Kendall Jenner along with Meryl Streep, Rihanna and Jennifer Lopez amongst other well-known names are continuing to support the trend even as we begin to approach cooler temperatures.

Premiering on Amazon, the media personality walked the red carpet in a silky slip dress coated in a mix of floral detailing and fringed edges for a retro-chic appeal. As for footwear, EmRata appeared to tap Femme LA for her sandals of the evening. The pale blue pair comes equipped with a thin securing strap across a pointed toe as well as a lace-up wrap hold around the ankle. Femme is a vegan label making waves for its buzzy heels, favored by the likes of Ashley Graham, Jennifer Lopez and Megan Fox amongst other huge names.

When it comes to shoes, Ratajkowski owns a long list of light-colored sneakers that she prefers for her outdoor excursions. Oftentimes, she favors all-white pairs from the likes of Nike, Adidas or Veja. If she decides to spruce it up with a more colorful style, you can find the “We Are Your Friends” actress in her new beloved Keds skate shoes, Bottega Veneta heels or her favorite red Celine snakeskin boots. Most recently, the model debuted a series of standout sneakers courtesy of Travis Scott’s must-have Nike collaborations.

As for design herself, Ratajkowski founded her Inamorata line of intimates in 2017 before she expanded it to become Inamorata Woman, including a wider variety of pieces like apparel, swimsuits and more. Beyond modeling pieces from her own collections, the 30-year-old new mom has starred in campaigns for DKNY, The Kooples and Jason Wu, among others.

Click through the gallery for more of Emily Ratajkowski’s daring style over the years.