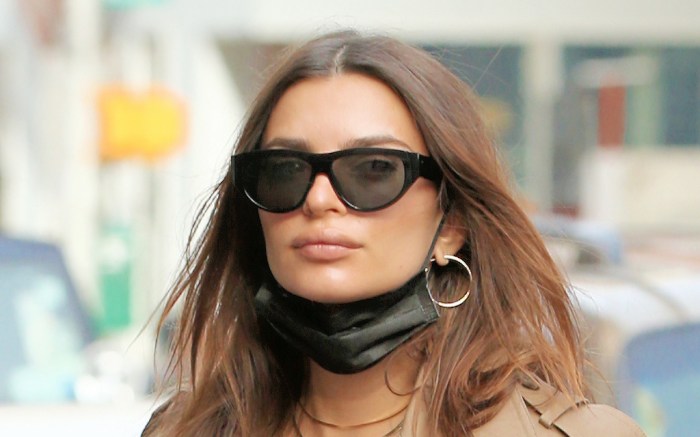 Emily Ratajkowski may have just found your next go-to outfit of the summer.

The model took to Instagram last night for a photo dump of her recent life happenings, including the first picture of her posing in a spacious New York apartment. For the occasion, Ratajkowski opted for an effortless chic satin slip dress complete with ruched detailing across the bodice.

Slip dresses like low-rise jeans and bandana tops are making their triumphant return from the late 1990s and early 2000s, favorited this year already by Rihanna, Kendall Jenner and more top stars.

When it came down to footwear, EmRata herself broke out another silhouette of her go-to shoes: white sneakers. Yesterday’s pair was a low-top leather silhouette set atop a rubber outsole.

Matching sneakers to dresses is also another major trend for this summer as celebrities and fashion fans alike transition slowly back into more glam attire. The casualness of a sneaker finds the perfect balance between dressed-up and relaxed styling for those who aren’t quite ready to break out their heels and sandals yet.

The “We Are Your Friends” star has mastered the art of matching a dress to sneakers and oftentimes favors the combination for her off-duty outings. Earlier this month, for example, the media personality, who gave birth to her son Sylvester with husband Sebastian Bear-McClard in March, ventured out for a stroll with a special guest in New York. As she pushed along her son’s stroller, Ratajkowski showed off her chic ensemble in an easygoing white minidress, green hat and tangerine shoulder bag; her outfit also included shades from Krewe Eyewear.

When it came down to shoes for the outing, EmRata tapped Vans. Titled the Classic Tumble Era, the sneaker debuted in 1976 and was the brand’s first shoe to includes its now-signature padded collar. You can shop Ratajkowski’s choice of a glowing white colorway for $60 at Vans.com.

When it comes to shoes, Ratajkowski owns a long list of light-colored sneakers that she prefers for her outdoor excursions. Oftentimes, she favors all-white pairs from the likes of Reebok, Nike, Adidas or Veja. If she decides to spruce it up with a more colorful style, you can find the “I Feel Pretty” star in her new beloved Keds skate shoes, Bottega Veneta heels or her favorite red Celine snakeskin boots. Most recently, the model debuted a series of standout sneakers courtesy of Travis Scott’s must-have Nike collaborations.

As for design herself, Ratajkowski founded her Inamorata line of intimates in 2017 before she expanded it to become Inamorata Woman, including a wider variety of pieces like apparel, swimsuits and more. Beyond modeling pieces from her own collections, the 29-year-old new mom has starred in campaigns for DKNY, The Kooples and Jason Wu, among others.

Click through the gallery for more of Emily Ratajkowski’s favorite sneaker style over the years.