Emily Ratajkowski Goes Comfy in a Neon Sweatshirt, Leggings & ‘Flame’ Sneakers for a Walk With Her Newborn Son 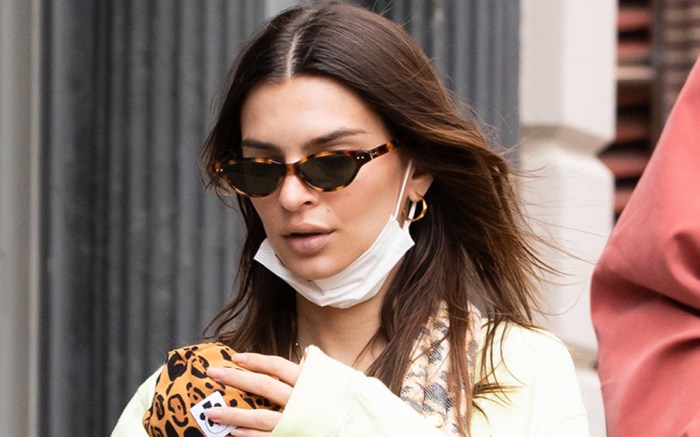 Emily Ratajkowski showed off her easygoing new mom style this week as she grabbed a breath of fresh air alongside her husband Sebastian Bear-McClard and their newborn son.

Holding tight to her 2-months-old son Sylvester, the model went comfy-chic for the outing in a highlighter  yellow sweatshirt and classic black leggings. Her look also included her signature cat-eye sunglasses and an animal print carrier for her child.

On her feet, the Inamorata Woman founder debuted yet another new sneaker silhouette. Coming from New Balance, EmRata appeared to opt for the brand’s 720 silhouette in a bright red, white and gray colorway; the style gives off a throwback vibe with its mixed material uppers, low profile and contrasting rigid rubber outsole. While the Silver Birch with Neo Flame colorway has since sold out, you can still find Ratajkowski’s choice of silhouette retailing for $70 at NewBalance.com.


When it comes to shoes, EmRata owns a long list of light-colored sneakers that she prefers for her outdoor excursions. Oftentimes, she favors all-white pairs from the likes of Nike, Adidas or Veja. If she decides to spruce it up with a more colorful style, you can find the “I Feel Pretty” star in her new beloved Keds skate shoes, Bottega Veneta heels or her favorite red Celine snakeskin boots. Most recently, the model debuted a series of standout sneakers courtesy of Travis Scott’s must-have Nike collaborations.

As for design herself, Ratajkowski founded her Inamorata line of intimates in 2017 before she expanded it to become Inamorata Woman, including a wider variety of pieces like apparel, swimsuits and more. Beyond modeling pieces from her own collections, the 29-year-old new mom has starred in campaigns for DKNY, The Kooples and Jason Wu, among others.

Click through the gallery to find more of Emily Ratajkowski’s bold sneaker style over the years.