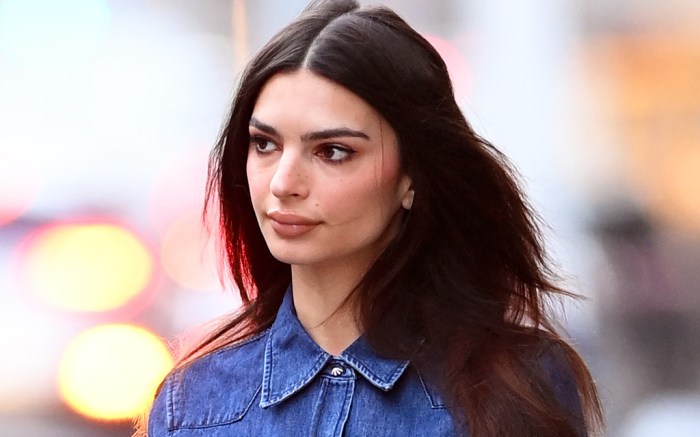 Emily Ratajkowski gave her take on retro style this morning as she headed to CBS.

The model, who is promoting her upcoming book, stepped out of her New York apartment on Monday in an all-denim look; the long-sleeve jumpsuit offered up a 1970s appeal with its darkened wash and flared leg, cinched together with a braided leather belt.


To give her outfit another vintage touch, EmRata herself opted for sleek leather boots when it came to footwear. The almond-toe silhouette came with burgundy uppers and a block heel base for an added lift. The design comes from Loeffler Randall and retails for $695.


When it comes to shoes, Ratajkowski owns a long list of light-colored sneakers that she prefers for her outdoor excursions. Oftentimes, she favors all-white pairs from the likes of Nike, Adidas or Veja. If she decides to spruce it up with a more colorful style, you can find the “We Are Your Friends” actress in her new beloved Keds skate shoes, Bottega Veneta heels or her favorite red Celine snakeskin boots. Most recently, the model debuted a series of standout sneakers courtesy of Travis Scott’s must-have Nike collaborations.

As for design herself, Ratajkowski founded her Inamorata line of intimates in 2017 before she expanded it to become Inamorata Woman, including a wider variety of pieces like apparel, swimsuits and more. Beyond modeling pieces from her own collections, the 30-year-old mom has starred in campaigns for DKNY, The Kooples and Jason Wu, among others.

Take inspiration from Emily Ratajkowski in these sleek boots.

Click through the gallery for more of Emily Ratajkowski’s glam style over the years.