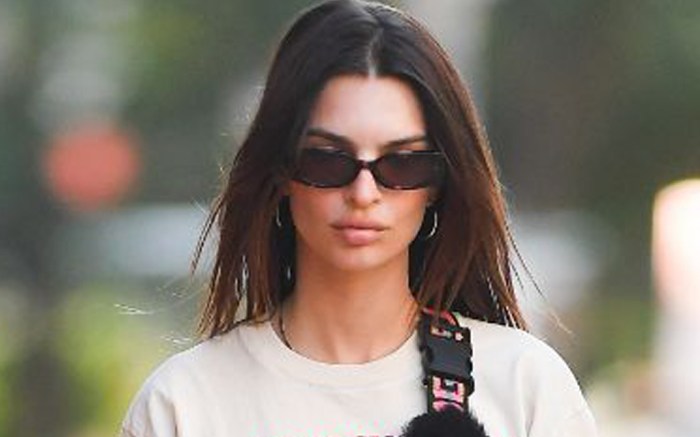 Emily Ratajkowski brought her dog walking style to the next level this week.

Taking her furry friend Colombo for a stroll in New York on Wednesday, the model went casual-chic in a trending set of biker shorts and an oversize tee.

Her outfit also included a wildly oversize belt bag, worn strewn across her chest courtesy of Aries; the hard-to-miss sheepskin bag retails for over $630 at Slam Jam.


When it came down to footwear, EmRata broke out a buzzy set of retro-chic sneakers from New Balance. The sportswear powerhouse was named the 2020 Athletic Brand of the Year for the FN Achievement Awards thanks to its successes in the sneaker world with hit collaborations and new must-have silhouettes.

Ratajkowski’s own pick comes courtesy of the Boston-based brand’s ongoing collaboration with New York streetwear brand Aime Leon Dore. Reimaging the 550 silhouettes, the sneaker features hits of red and black atop a white leather upper. The collab debuted in October 2020 with a retail price of $130 but now resells for upwards of $335 to $825 at StockX.


When it comes to shoes, Ratajkowski owns a long list of light-colored sneakers that she prefers for her outdoor excursions. Oftentimes, she favors all-white pairs from the likes of Nike, Adidas or Veja. If she decides to spruce it up with a more colorful style, you can find the “I Feel Pretty” star in her new beloved Keds skate shoes, Bottega Veneta heels or her favorite red Celine snakeskin boots. Most recently, the model debuted a series of standout sneakers courtesy of Travis Scott’s must-have Nike collaborations.

As for design herself, Ratajkowski founded her Inamorata line of intimates in 2017 before she expanded it to become Inamorata Woman, including a wider variety of pieces like apparel, swimsuits and more. Beyond modeling pieces from her own collections, the 30-year-old new mom has starred in campaigns for DKNY, The Kooples and Jason Wu, among others.

Flip through the gallery for more of Emily Ratajkowski’s chic dog walking style over the years.