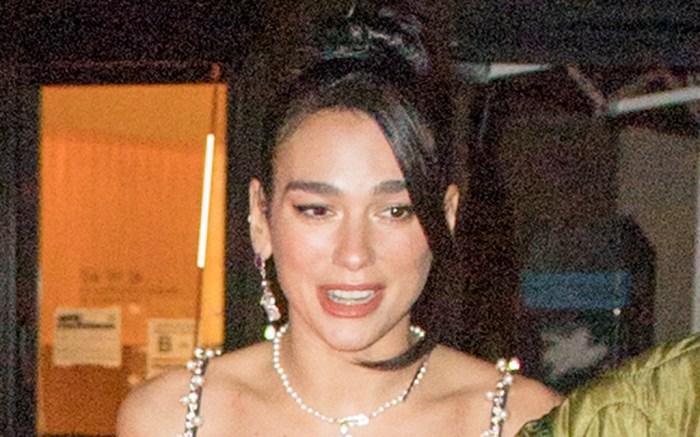 Dua Lipa gave a whole new meaning to a “Canadian Tuxedo” this weekend while out in New York.

After celebrating the first birthday of Gigi Hadid and Zayn Malik’s daughter, Dua Lipa joined Anwar Hadid for a chic dinner outing on Sunday night. The “New Rules” singer tapped Area for her outfit of the evening, doubling up on denim in a lace-up bustier and embellished jeans.

To give the outfit a funky disco appeal, the “Don’t Start Now” singer lifted her frame in sky-high platform heels. The pink metallic pair featured an approximate 3-inch front base with strappy uppers and a peep-toe fit; to top it all off, Dua Lipa’s heels also included a unique flared heel measuring over 6 inches in height.

Beyond an award-winning music career, Dua Lipa herself dips her toes in the fashion world quite often. From sitting from rows at major shows during Fashion Month to selecting daring duds for red carpet appearances, she keeps things regularly exciting. The “One Kiss” songstress previously appeared in campaigns for YSL Beauté and Fragrance, Adidas and Pepe Jeans amongst others.

Her ensembles and style are credited to celebrity stylist Lorenzo Posocco; Dua Lipa is Posocco’s main clientele but he has also worked with Troye Sivan and Alex Demie in the past. Most recently, Dua Lipa signed on as a Puma ambassador with a multi-year deal as she serves as the face of its women’s business.

Click through the gallery to find more of Dua Lipa’s edgy style over the years.