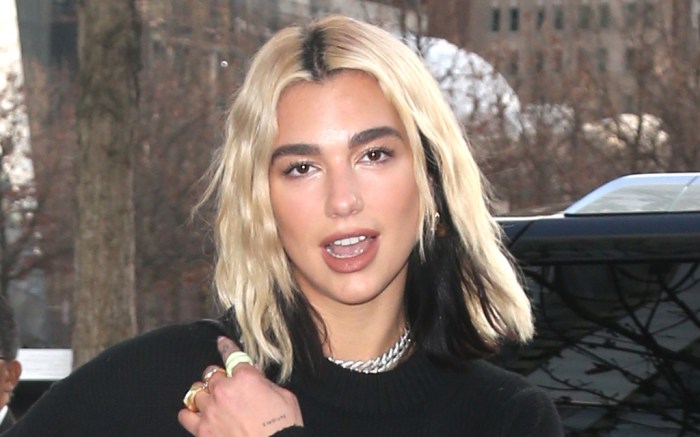 When it comes to Dua Lipa, standout outfit combinations are the new normal.

The “New Rules” singer took to Instagram yesterday to show off her chic outfit of the day. Captioning the post “schools out,” the British star opted for a uniforrm-inspired outfit that layered a burgundy polka dot dress with a laser-cut lace collar.

Continuing the bold elements of the look, she also included a few ’90s chic elements like a matching scrunchie, printed tote bag and chunky combat boots.

Her footwear of choice bore a familiar design element of Dr. Martens boots, a signature exposed yellow stitching across the welted sole. Dua Lipa’s pair, in particular, included sleek patent leather uppers with a lace-up design and a lifted 2-inch platform base. Set with a comfortable air-cushioned sole, similar slip-resistant Jadon boots retail for $180 at DrMartens.com.

Combat boots and hiking-inspired styles are the new norm amongst celebrity style trends, experiencing a revitalization along with a dew other silhouettes from the 1990s. From brands like Prada along with Bottega Veneta and Dr. Martens, these lug-sole boots offer ease of wear with an edgy-chic appeal. This season, you’ll spot utilitarian boots on the likes of Kylie Jenner, Cara Delevingne, Gwen Stefani and more major stars.

When she isn’t in sweet dresses and grungy boots, you can find Dua Lipa in more wild outfits like airbrushed skirts, cardigans and Puma sneakers or cutout pink rompers with sheer tights and rainbow Aminua Muaddi mules.

Beyond a Grammy Award-winning music career (and an impressive six new nominations for the upcoming 2021 Grammy Awards), Dua Lipa dips her toes in the fashion world quite often. From sitting from rows at major shows during Fashion Month to selecting daring duds for red carpet appearances, she keeps things regularly exciting. The “Levitating” singer previously appeared in campaigns for YSL Beauté and Fragrance, Adidas and Pepe Jeans amongst others.

Click through the gallery to find more of Dua Lipa’s boldest looks throughout her career.