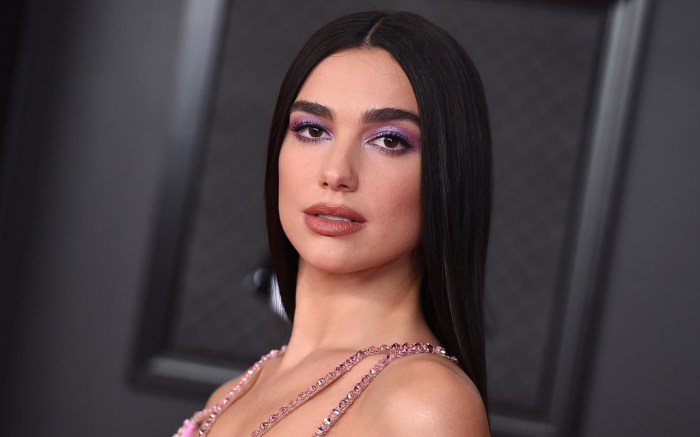 Raising donations and performing all the while, Dua Lipa went glam for her moment on stage alongside the music legend himself in glittering Balenciaga. The long-sleeve, sheer-paneled number comes fresh off the runway from the brand’s fall ’21 collection, capped off with a fringed hem and iridescent silver detailing. The look also included Chopard earrings, Fabergé jewelry and glowing white pumps courtesy of Balenciaga as well.

The white heels are a recognizable design from the French fashion house, most noticeably for their unique heel counter and elongated pointed toe. Titled the Knife silhouette, the sleek pumps measure over in 3 inches in height and retail for close to $800 at Moda Operandi.

The man of the hour himself, Sir Elton John, also went for a glittering look for the event. His lurex blazer came with a shimmering blue finish and personalized patches across the chest. In signature fashion, the “Rocketman” musician layered the piece over a relaxed tee and include retro-chic pink shades to match.

As for Dua Lipa herself, beyond an award-winning music career, the British musician dips her toes in the fashion world quite often. From sitting from rows at major shows during Fashion Month to selecting daring duds for red carpet appearances, she keeps things regularly exciting. The “Don’t Start Now” singer previously appeared in campaigns for YSL Beauté and Fragrance, Adidas and Pepe Jeans amongst others.

Most recently, Dua Lipa signed on as a Puma ambassador with a multi-year deal as she serves as the face of its women’s business. Through her new title, the musician will aim to “help inspire women around the world” through worldwide efforts and “important inclusive initiatives close to her heart,” according to the company.

Click through the gallery to find more of Dua Lipa’s boldest red carpet looks over the years.