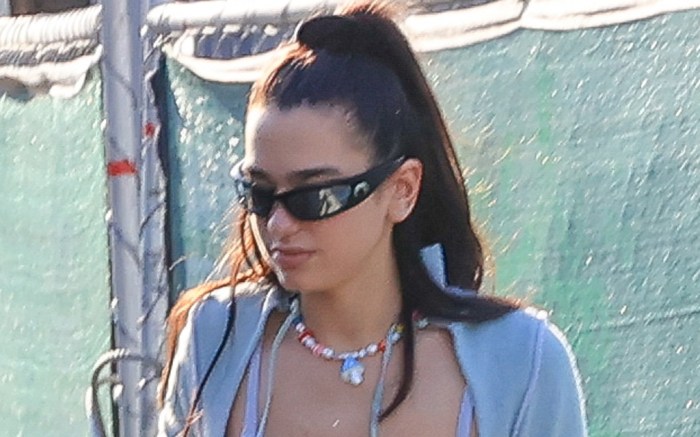 Dua Lipa joined her beau Anwar Hadid for a chic ice cream outing this week after a successful Grammys night on Sunday.

The “Don’t Start Now” singer broke out her signature 1990s and early 2000s style on Wednesday, layering a coordinating Danielle Guizio blue cardigan over a bright knit bralette with a beaded necklace to match. She also included dark-wash mom jeans and a chunky belt to accent.

Mom jeans, as well as retro-chic cardigans, are both experiencing a moment on the fashion scene amidst revitalizations of late 1990s and early aughts trends such as combat boots and low-rise bottoms.


To boost her trendy attire even further, the “New Rules” singer tapped a celeb-favorited silhouette from Natasha Zinko. The neon pink Bandanna slides featured a paisley print and a puffer fuzzy upper, all set atop a chunk midsole and a soft interior lining. You can shop the funky cross-strap pair for $644 at Farfetch.


Beyond a Grammy Award-winning music career, Dua Lipa herself dips her toes in the fashion world quite often. From sitting from rows at major shows during Fashion Month to selecting daring duds for red carpet appearances, she keeps things regularly exciting. The “Levitating” singer previously appeared in campaigns for YSL Beauté and Fragrance, Adidas and Pepe Jeans amongst others.

Recreate Dua Lipa’s retro-chic style in these next pieces inspired by her look.

Click through the gallery to discover more of Dua Lipa’s edgiest looks over the years.