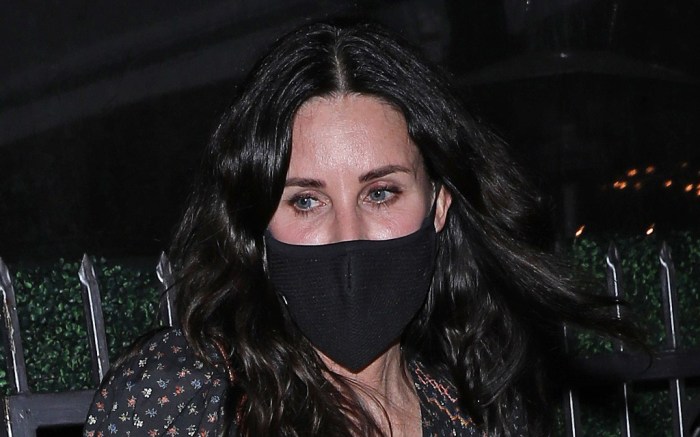 Courteney Cox blended the best of her style tastes this week for a dinner date with friends.

To give her sweet look a twist of edge, Cox then zipped up a pair of sleek leather boots. The round-toe design included patent uppers with a block heel boot and circular metallic studs across the shaft.


The “Friends” actress previously modeled the same set of booties for a date with beau Johnny McDaid back in April.

Stepping out for a bite to eat at Nobu Malibu, Cox howed off her casual-chic style in a dark denim jacket, printed blouse and classic skinny jeans. Her choice of denim is an argued move as per Gen-Z tastes who have taken to TikTok in recent weeks to express their thoughts on the 2000s-chic silhouette along with side parts and more millennial trends.

As for Cox herself, the selection of chic looks is just one of the many notable fashion moments during her successful career. During her time spent as Monica Gellar on the beloved sitcom “Friends,” Courteney Cox was a master of peak ’90s and early 2000s trends. Her minimalistic appeal roped in everything from mom jeans and leather jackets to spaghetti-strap slip dresses and oversize pantsuits for red carpet occasions. Flash forward to modern time and Cox is still incorporating that same “less is more” aesthetic with seasonal hits of high-rise jeans, cool sneakers and little black dresses.

Channel Courteney Cox in style in these edgy studded boots.