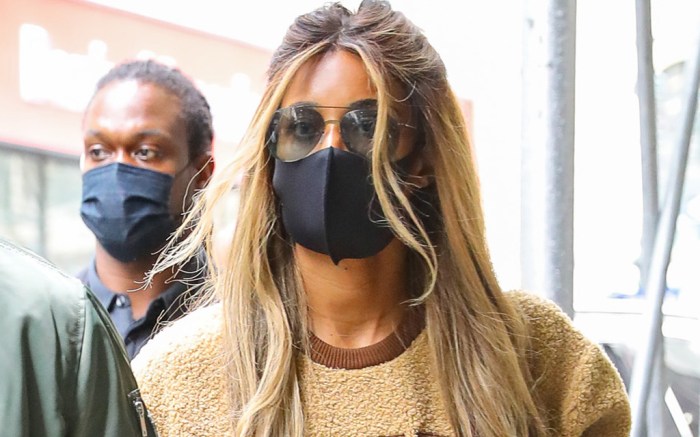 Ciara and Russell Wilson put their chic couple style on full display today during an outing in New York.

The NFL professional and the “Level Up” musician arrived at an office building in the city for a meeting this afternoon, walking hand in hand in stylish ensembles. While Wilson modeled pieces branded with both his own logo and the Nike Swoosh, Ciara tapped into one of last year’s buzziest collabs for her attire. The North Face x Gucci sweatshirt once retailed for $1,400 (and now resells for around $1,500 on StockX) and came matched to trending leather leggings as well as a LAPCOS face mask.

The two brands announced their buzzy joint collection in December 2020 and it is already one of the most talked-about collaborations of the new year. Though the capsule first released through a series of pop-up shops, the designs have already graced the likes of A$AP Rocky, Jennifer Lopez, Tracee Ellis Ross and more major stars in the past few weeks.


To continue her own stylish take on the brand’s collab, Ciara tapped another well-known label for her chunky combat boots. The Chanel design featured quilted uppers with a lugged outsole and cuffed ankle.

Combat boots and hiking-inspired styles are the new norm amongst celebrity style trends, experiencing a revitalization along with a dew other silhouettes from the 1990s. From brands like Prada along with Bottega Veneta and Dr. Martens, these lug-sole boots offer ease of wear with an edgy-chic appeal. This season, you’ll spot utilitarian boots on the likes of Kylie Jenner, Gwen Stefani, Eva Longoria and more major stars.

Throughout the past few months, the married couple themselves have continued to debut stylish pieces from their Human Nation collection, a part of the singer and star NFL husband’s House of LR&C parent company.

In addition to welcoming in their son Win in July, Ciara and Wilson did their part and more to help combat the rippling effects from the pandemic this year. In March, the couple donated 1 million meals to Seattle food bank Food Lifeline. Wilson also partnered with Wheels Up America to go “Meals Up” and donate 10 million meals to Feeding America.

Click through the gallery to find more of Ciara’s style evolution over the years.