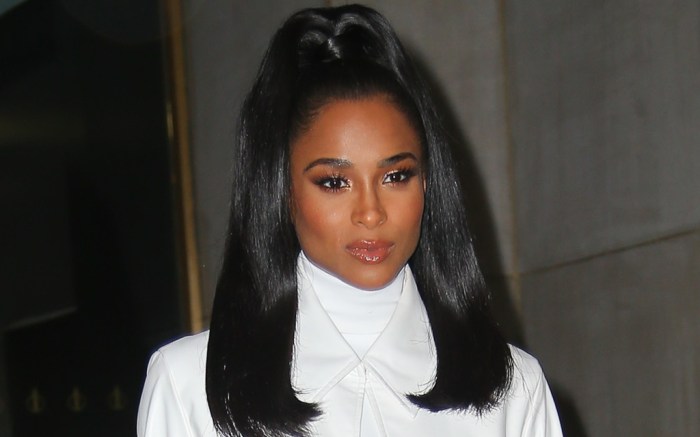 Ciara gave her twist on tennis whites this weekend in an unexpected set of shoes for a match.

The “Level Up” singer posed atop a tennis court in bold fashion, modeling an all-white Naked Wardrobe $58 catsuit complete with an athletic-style fabric, long-sleeve fit and biker shorts-inspired finish. The real kicker of the look, though, came with Ciara’s choice of footwear.

The lug-sole Prada boots feature a chunky base contrasted by mixed material uppers and a combat boot-inspired lace-up silhouette. Accented by a removable pouch across the ankle, the all-white iteration of the utilitarian boots has since sold out — but a black colorway can still be found for $1,350 at Saks.

Combat boots and hiking-inspired styles are the new norm amongst celebrity style trends, experiencing a revitalization along with a dew other silhouettes from the 1990s. From brands like Prada along with Bottega Veneta and Dr. Martens, these lug-sole boots offer ease of wear with an edgy-chic appeal. This season, you’ll spot utilitarian boots on the likes of Kylie Jenner, Gwen Stefani, Eva Longoria and more major stars.

Ciara herself is no stranger to a standout boot moment, previously wearing an all-black take on her designer boots back in January The “Body Party” musician took to Instagram to debut pieces from her Human Nation collection, a part of the singer and husband NFL star Russell Wilson’s House of LR&C parent company. In designs now available at Kohl’s, Ciara teamed a coordinating galaxy-style $42 crop top and $44 matching leggings.

The singer gave birth to her son Win Harrison Wilson in July and was able to bring him home to an extravagant welcoming. Win is her second child with husband and NFL star Russell Wilson; the couple shares a daughter Sienna, 3, and Ciara also has a son, Future, 6, whom she shares with ex-fiancé rapper Future.

Throughout her pregnancy, the “1, 2 Step” musician continued to debut an endless series of chic maternity looks that ranged from at-home workout ensembles with throwback Nike Natural Ride Free RN sneakers to an all-black leather look from Patrycja Pagas matched to glittering sandals from Giuseppe Zanotti.

In addition to welcoming in their son in July, Ciara and her husband, NFL star Russell Wilson did their part and more to help combat the rippling effects from the pandemic this year. In March, the couple donated 1 million meals to Seattle food bank Food Lifeline. Wilson also partnered with Wheels Up America to go “Meals Up” and donate 10 million meals to Feeding America.

Hop on the combat boot trend like Ciara in these sleek white pairs for spring.

Click through the gallery to find more of Ciara’s style evolution over the years.