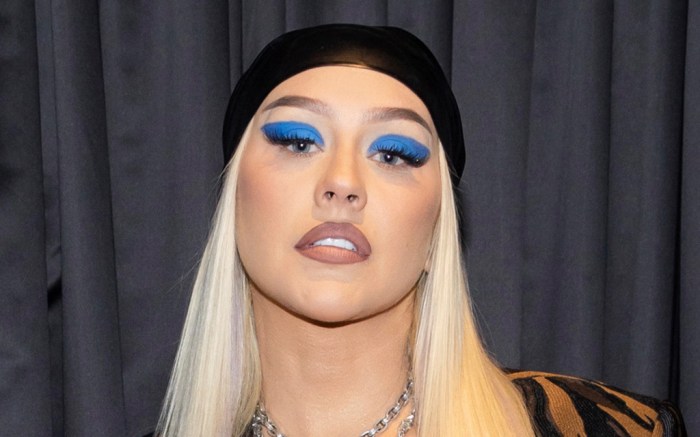 The “Burlesque” actress took to Instagram last night to give a behind-the-scenes look at her rehearsals, modeling a sleek satin suit for the occasion. The navy outfit included a reflective blazer with a cinched belt and coordinating textured pants.

Suiting up has become the new normal amongst celebrity style trends thus far in 2021, potentially led in part by the first-ever female Vice President Kamala Harris and her neverending lineup of perfectly tailored power suits. Stars including Amanda Seyfried, Carrie Underwood, Tracee Ellis Ross and more have already pulled off the trend this season with more bold looks to come.

On her feet, Xtina oped for see-through mules with a pointed-toe finish and structured heel.

Aguilera herself is a major supporter of see-through heels. In May, for example, she prepped for a scenic horseback ride this weekend but her outfit brought things to a whole new level.

The “Lady Marmalade” singer posed in a bold look for her millions on Instagram followers last night, modeling a form-fitting dress that hit just at the ankles; the long-sleeve number incorporated a mix of blue shades all coated in a warped black pattern. On her feet, the musician continued her eye-catching ensemble in see-through pumps set with a pointed toe and an almost invisible wedge heel.

When it comes to shoes, the “Genie in a Bottle” singer is no stranger to a heightened look. More often than not, you can find Aguilera in boots, sandals and pumps that come set atop a teetering heel. Even throughout her time in quarantine, the musician continued her streak of bold footwear choices. Christina Aguilera’s towering heels and designer duds last night serve as further examples of the singer’s standout style. From Viktor & Rolf couture gowns to Gina Shoes latex thigh-high boots, the former “The Voice” judge has a knack for taking her outfits above and beyond the expected.

Incorporate the PVC trend into your footwear rotation in these see-through heels inspired by Christina Aguilera.

Check out the gallery for more of Christina Aguilera’s bold taste over the years.