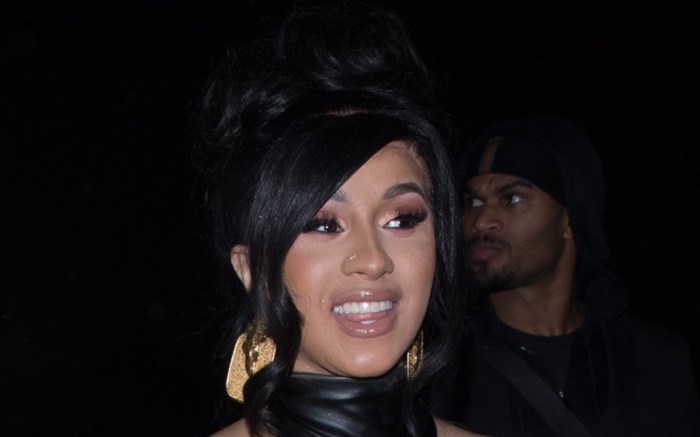 Cardi B proved this week that staying in can be just as edgy as going out.

Taking to Instagram on Monday, the “WAP” rapper modeled all-black attire from the comfort of her own home; she perched atop her stairs for the post in a black structured bodysuit with padded shoulders and a draped silhouette.

The final touch of her monochrome attire came in the form of thigh-high black stockings; Commando offers a similar version for $34 at Nordstrom.

While Cardi B’s version was a sock not a shoe, knee-high and thigh-high silhouettes are the must-have boots this season. From leather twists on the trend to edgy lace-up styles, you can find the taller shoes on everyone from Ciara to Lily Collins and Gwen Stefani amongst other major names. In colder temperatures, the silhouettes offer coverage to counter skirts, dresses and shorts as well as provides an extra layer to any leggings or jeans look.

Earlier this week, the “Bodak Yellow” rapper posted her first Instagram ensemble after a month-long hiatus in May. To celebrate Migos’ new album release, Cardi B went bold in scale-like leggings and top set from Marine Serre along with not one but two Hermès Birkin bags.

On her feet, the musician tapped SybG by Sybille Guichard for a rainbow set of heels. You can find the mixed material and mixed colored style for $129 on Sybilleguichard.com.

Deemed the Style Influencer of the Year for the 2020 FN Achievement Awards, Cardi B herself is also a master of both luxurious apparel and athleisure fashion. She joined Balenciaga as the face of its fall ’20 campaign in September, with ads displayed across the Louvre in Paris. When it comes to her everyday looks, you can find Cardi B in everything from Mugler catsuits to glittering Balmain skirts and her favorite Jessica Rich heels.

The “Hustlers” star also continues to hold the ultimate hook-up for sportswear since partnering with Reebok in November 2018; together, Cardi B has helped the brand released a series of collections as she starred in a variety of campaigns and videos featuring embellished sneakers and vintage-inspired pieces before creating her own collections of footwear and apparel.

The Grammy Award-winning artist too filed paperwork last year with the United States Patent and Trademark Office in September in an attempt to trademark the term “WAP” for a variety of items from footwear to apparel to even alcoholic and non-alcoholic beverages.

Click through the gallery for more of Cardi B’s most glam moments.