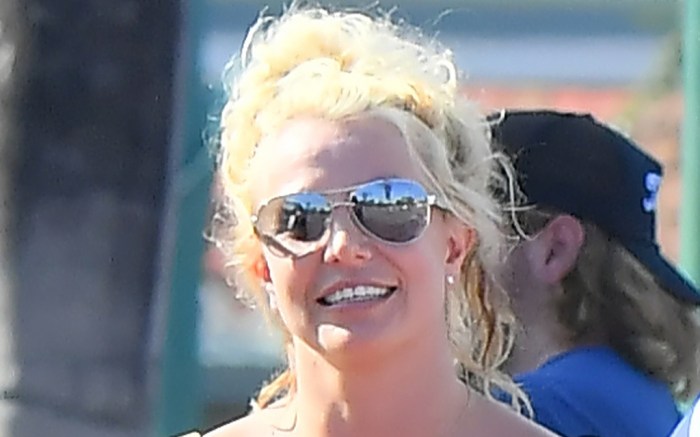 Britney Spears showed off her at-home dancing skills with ease thanks to this clever footwear move.

The “Toxic” musician took to Instagram to debut her newest routine, performing a lyrical dance in a white ruffled crop top and striped pajama shorts. On her feet, Spears found the perfect solution between going barefoot and wearing regular sneakers by taping up her foot and slipping on a half sock over her toes as she explained in her post.

“If you’re wondering why I have socks at the tip of my toes … well I’m waiting for real lyrical shoes !!!! The marble floor has done a number on my feet with blisters so white tape covered with a black sock will have to do for now !!!!,” explained Spears in her caption. “My lyrical shoes come tomorrow and I haven’t worn a pair since I was 9 so I’m sure they’re even better these days !!!”

Earlier this month, Spears gave her take on the growing monochrome trend this week in the most on-brand fashion.

The “Lucky” singer answered a few questions, addressing her goals for the year as she posed in the living room of her home. For the clip, Spears tackled monochromatic styling in a black ruffle-sleeve crop top, her favorite low-rise shorts and round-toe wedges.

Color-coordinated attire has quickly become the must-see styling hack of 2021, offering a streamlined route into a chic ensemble. Stars like Kylie Jenner, Jennifer Lopez and even Michelle Obama have tried out the trend for themselves in the past weeks alone.

In addition to sleek heels and clever socks, Spears’ collection of relaxed footwear includes affordable styles like Steve Madden platforms as well as Birkenstock Arizona sandal slides and Hoka One One Clifton sneakers. When the pop star does make a red carpet appearance, she typically selects pairs from top brands such as Christian Louboutin, Giuseppe Zanotti and Le Silla.

Beyond her personal style repertoire, the “Gimme More” singer collaborated with a mix of brands throughout her career, including creating a co-branded collection with Candies in 2010; she also previously appeared in the Kenzo La Collection Momento N°2 campaign in 2018.

Click through the gallery to discover more of Britney Spears’ style evolution over the years.