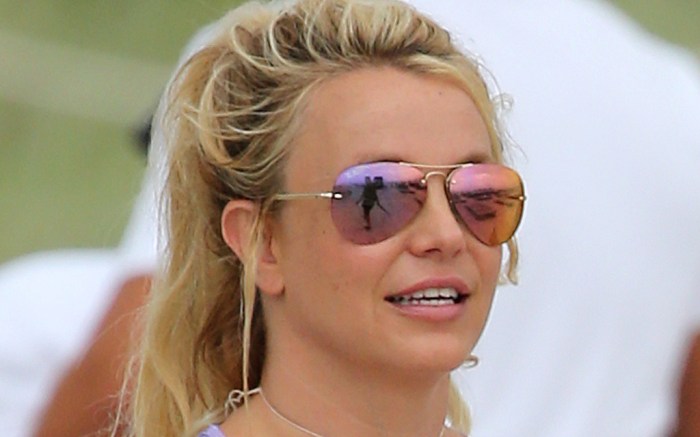 Britney Spears is making the most of life this weekend as she headed off on vacation at a private island.

Sharing a behind-the-scenes look at her voyage on Instagram, the “Lucky” singer posed before her helicopter ride on Thursday in glam attire. Her look layered a glittering dress under a black peacoat with a floppy hat to match. Holding tight to a stack of beach reads, Spears also modeled oversize sunglasses and a pearl necklace for a glam finish.

On her feet, the singer rounded out her look with classic brown leather pointed-toe pumps set atop a stiletto heel.

The “Toxic” musician is no stranger to a dressed-up moment, either. Earlier this month, she shared a statement look complete with a little red velvet dress and sleek black heels.

“I found my pretty little red dress and I felt like I was wearing pajamas but it’s just a slip dress !!!!,” wrote Spears in her caption. “I doubt I would ever wear this out anywhere but it’s fun to play !!! Here’s two min of me in it … even though I will probably never wear it again.”

Beyond her personal style repertoire, the “I A Slave 4 U” musician collaborated with a mix of brands throughout her career, including creating a co-branded collection with Candies in 2010; she also previously appeared in the Kenzo La Collection Momento N°2 campaign in 2018.

Click through the gallery to see Britney Spears’ most memorable street style looks.