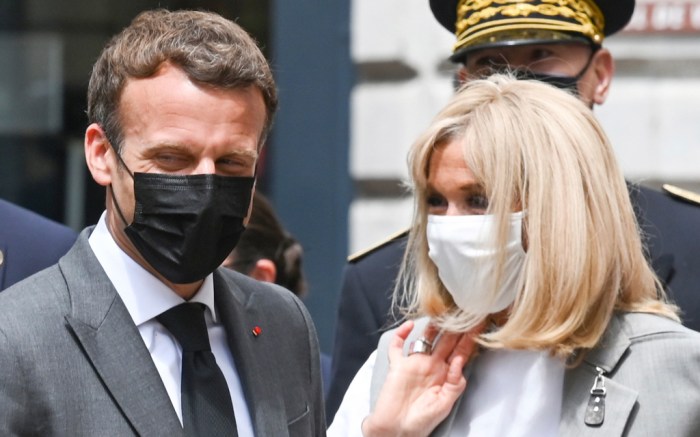 French President Emmanuel Macron and first lady Brigitte Macron made their way across Southern France this morning in coordinating attire.

The first couple stopped by the town of Valence in southeastern France today in gray suits. Brigitte’s own look included a blazer-style vest worn over a surprisingly casual white long-sleeve tee with coordinating suit trousers as well.

As for footwear, the color scheme continued down into the first laddy’s choice of suede pumps. The pointed-toe shoes came set with green-gray uppers and a rounded vamp, all balanced with a heel that appeared to measure over 4 inches in height.

Color-coordinated attire has quickly become the must-see styling hack of 2021, offering a streamlined route into a chic ensemble. Stars like Kourtney Kardashian, Eva Longoria and even Michelle Obama and Jill Biden have tried out the trend for themselves in the past weeks alone.

Earlier in the day, the French president himself made headlines as he visited the town of Tain-l’Hermitage outside the city of Valence. in the country. During his stop, President Macron was slapped in the face by an unidentified man, as confirmed by Macron’s office. Two men have reportedly been arrested in relation to the incident.

When it comes to the French first lady herself, Brigitte Macron makes her own fashion headlines as she tends to tap Louis Vuitton for everything from clothing to shoes and accessories. With footwear, specifically, she leans toward pointed-toe pumps with a stiletto or block heel usually around 4 inches high. The Eyeline silhouette from the French fashion powerhouse remains one of her favorites, of course, but she also frequents the graphic-print Matchmake pump and booties. The educator lives up to the style motifs of her native France, opting for layered looks and perfectly tailored pieces that keep up with the nation’s style aesthetic: chic, clean and understated.

Click through the gallery for more of Brigitte Macron’s style over the years.