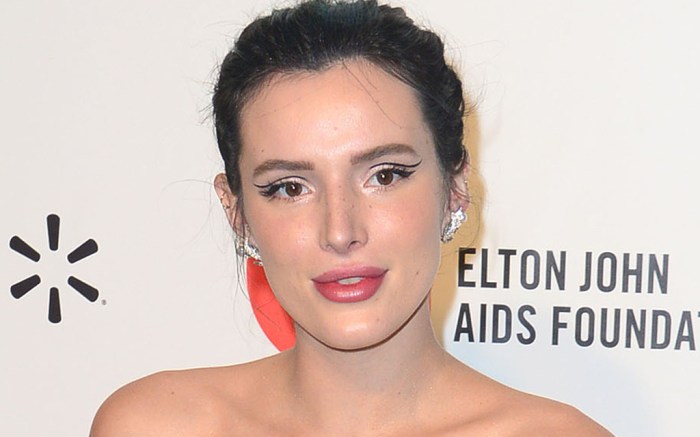 Bella Thorne’s engagement may be new but the actress is already previewing her bold bridal style.

The “Shake It Up” alumna gave fans a taste of her bride-to-be attire this weekend, posing at home in a dramatic white gown. The off-the-shoulder, ruffle-trimmed gown featured an organza finish with a billowing skirt and endless flowing train.

Thorne also unveiled a glam choice of wedding footwear in a set of stiletto sandals, coated with contrasting white and metallic silver uppers for an edgier contrast to her whimsical dress.

“Put on some white and feeling like a bride to be what do you guys think i’ll wear to my wedding?? taking suggestions..,” wrote Thorne in her caption.

Last month, the actress soaked up all the sunshine she could during her trip to Miami — especially after her now-fiancé Benjamin Mascolo proposed in an unmissable way.

The Disney Channel alumna, took to Instagram to show off the proposal in Marrch while also debuting her beach-ready attire with her new ring. Prepping for a day by the water, Throne layered a matching tie-dye string bikini set under logo-coated pants courts of Balenciaga; wearing a matching top as well, the bottoms retail for over $1,600 at MyTheresa.

To top off the beachside attire, the 23-year-old actress brought back one of 2020’s biggest footwear trends: “ugly” sandals. Typically considered “ugly” in the world of fashion, the new appreciation for comfortable sandal styles comes with an increased desire for ease of wear and stability in the fashion world amidst the current environment — and for 2021, too, it appears the shoes are here to stay. Brands like Teva and Birkenstock are at the forefront of the trend while celebs including Britney Spears, Tracee Ellis Ross and Sofia Richie can oftentimes be spotted in the silhouettes.

When it comes to Thorne’s personal style, the actress already owns a wide collection of pairs from Ugg, including the brand’s edgy graffiti slides, in addition to other more affordable trending brands like Ash, Puma and Converse. The 23-year-old tends to mix it up between casual short shorts and sneakers and heels from brands like Christian Louboutin, Stella Luna and Saint Laurent.

The “Her & Him” star has served as an ambassador for Biore, Buxom and Neutrogena products as well as starred in campaigns for Miss Me, Candie’s and more. As for her next projects, the entertainer is also set to star in an upcoming series titled “Paradise City” alongside Olivia Culpo and the late Cameron Boyce.

Click through the gallery to see more of Bella Thorne’s boldest looks over the years.