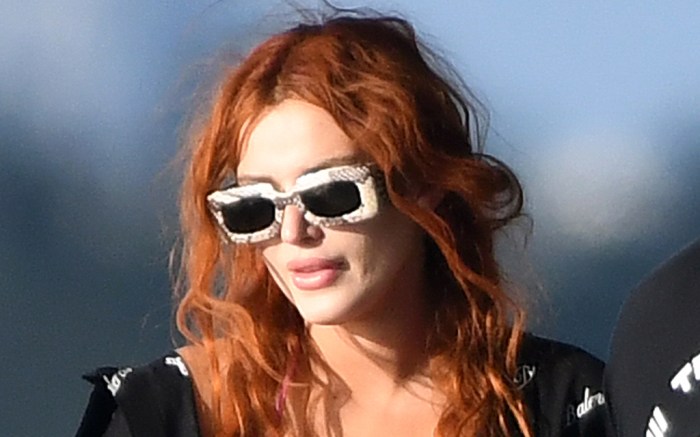 Bella Thorne is more than ready for hot girl summer, proving so on her Instagram this week.

The “Shake It Up” actress took showed off her summery style in a Y2K-inspired ensemble. With Y2K being a shortened way to say the year 2000, Thorne channeled decades past in a matching floral halter-neck bikini and statement boots.

The neon green, croc-embossed pair came hit just below the knees and came set atop a lifted heel; the design bears a resemblance to Paris Texas’ signature boot silhouette with a heel height of 4.3-inches and a price tag of $737 at Farfetch.

Knee-high and thigh-high boots, too, are the must-have boot silhouettes this season. From leather twists on the trend to edgy lace-up styles, you can find the taller shoes on everyone from Ciara to Lily Collins and Gwen Stefani amongst other major names. In colder temperatures, the silhouettes offer coverage to counter skirts, dresses and shorts as well as provides an extra layer to any leggings or jeans look.

In addition to her own tall boots, Bella Thorne herself is no stranger to matching a unique bikini with edgy footwear. During her trip to Miami, the Disney Channel alumna, who recently got engaged to now-fiancé Benjamin Mascolo, took to Instagram to show off her beach-ready attire. Prepping for a day by the water, Throne layered a matching tie-dye string bikini set under logo-coated pants courts of Balenciaga; wearing a matching top as well, the bottoms retail for over $1,600 at MyTheresa.

To top off the beachside attire, the 23-year-old actress brought back one of 2020’s biggest footwear trends: “ugly” sandals. Typically considered “ugly” in the world of fashion, the new appreciation for comfortable sandal styles comes with an increased desire for ease of wear and stability in the fashion world amidst the current environment.

Thorne’s own pick gave the trend a designer twist, tapping Chanel for a black double-strap design. The chic flats have since sold out but once retailed for over $1,800 and were a favorite of Elsa Hosk, Alexa Chung and more.

When it comes to Thorne’s personal style, the actress already owns a wide collection of pairs from Ugg, including the brand’s edgy graffiti slides, in addition to other more affordable trending brands like Ash, Puma and Converse. The Disney Channel alumna tends to mix it up between casual short shorts and sneakers and heels from brands like Christian Louboutin, Stella Luna and Saint Laurent.

The “Her & Him” star has served as an ambassador for Biore, Buxom and Neutrogena products as well as starred in campaigns for Miss Me, Candie’s and more. As for her next projects, the entertainer is also set to star in an upcoming series titled “Paradise City” alongside Olivia Culpo and the late Cameron Boyce.

Click through the gallery for more of stars like Gigi Hadid and Bella Thorne who love their boots in the summer.