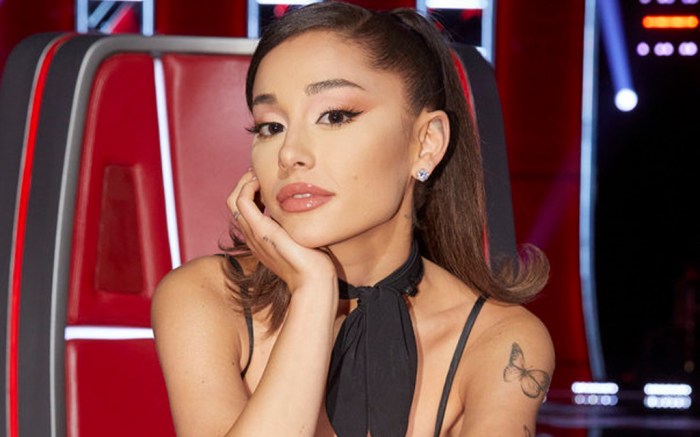 Ariana Grande is coming to “The Voice” and her arm of fans are already preparing in advance.

The NBC music competition has been sharing teasers on its Instagram leading up to Monday’s episode, highlighting its newest judge. For the first episode, Grande is going monochrome in a flapper-style little black dress complete with layers of fringe and a ’60s-chic necktie; the outfit also includes sheer tights and undeniably tall heels.

The “Positions” singer’s black peep-toe pumps come set atop a lifted platform as well as a towering stiletto heel, appearing to measure close to 6 inches in height.

Earlier this summer, the “Sweetener” singer joined the music competition as a new judge for the upcoming season, pairing with Blake Shelton, John Legend and Kelly Clarkson in the hot seat. In July, the NBC series debuted a campaign on social media featuring all four judges in a camp-inspired promo.

For the clip, Grande broke out her signature bold style in a glittering minidress layered with sheer black tights. To elevate her petite frame, the “Victorious” alumna buckled up a set of strappy sandals complete with a platform base and an over 6-inch curved heel.

The Grammy Award-winning artist herself has never been one to shy away from a bold footwear moment. In fact, the singer more often than not opts for taller heels in everything from her on-stage looks to her off-duty style. Her previous heightened styles have come from Club Exx, Demoni, Unravel and more top labels.

When she isn’t in boots or heels, the “7 Rings” musician keeps things casual in Nike Air Force 1 kicks, Crocs clogs and Naked Wolfe chunky sneakers amongst other styles. Her career in fashion extends beyond just a stylish closet, though. She was named the face of Givenchy’s fall ’19 campaign and previously partnered with Reebok to help debut a brand new silhouette for fall ’18.

Click through the gallery for more of Ariana Grande’s bold style over the years.