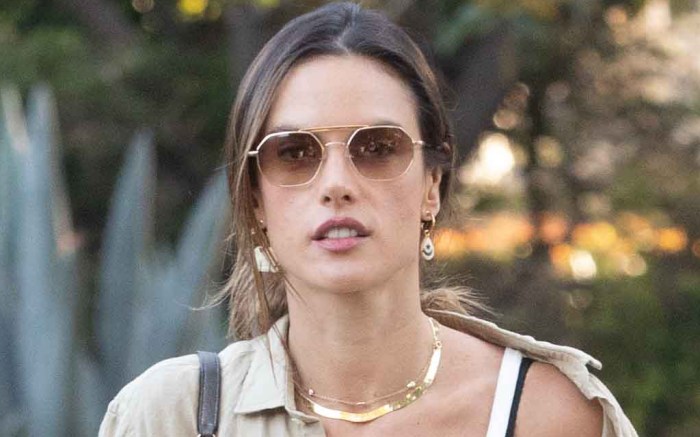 Alessandra Ambrosio proved that you can go bold at any age as she celebrated her 40th birthday in standout fashion.

The former Victoria’s Secret Angel rang in her big day out in California with friends and family hosting a Coachella-themed party. For the occasion, Ambrosio broke out her boldest style in a daring cutout dress from Mônot; similar cutout silhouettes from the brand retail for $1,600 at Farfetch.

The finishing touch of her standout birthday look came in the form of see-through heels. PVC footwear rose to prominence in 2018 and has since become a staple on the celebrity style scene. Brands like Manolo Blahnik, Christian Louboutin and Givenchy have jumped on the clear shoe train with bold heels and studded designs that flatter the foot and elongate the legs.

Ambrosio herself modeled a similar set of heels for a family outing earlier this week. The model brought her glam side to dinner last night alongside her two kids, Anja and Noah Mazur, as well as her beau Richard Lee. Together, the group stopped by the celeb-favorited restaurant Nobu Malibu in style. Ambrosio herself opted for a textured white minidress layered under a pale blush pink coat.

When it comes to her personal shoe style, the Brazilian personality can be found in a variety of looks, including casual sneakers by Common Projects and Golden Goose as well as bold picks like cherry red Giuseppe Zanotti heels. More recently, thong-toe sandals have become one of Ambrosio’s go-to shoes of choice throughout quarantine in addition to her big toe pairs. She owns multiple designs of classic flip flops from Havaianas of course, previously showing off all-black and other tan colorways, as well as a pair from Brazilian eco-friendly footwear brand Green Flip Flops, constructed with plant-based plastic.

Try out PVC footwear for yourself in these heels inspired by Alessandra Ambrosio.

Click through the gallery to find more of Alessandra Ambrosio’s chic style over the years.