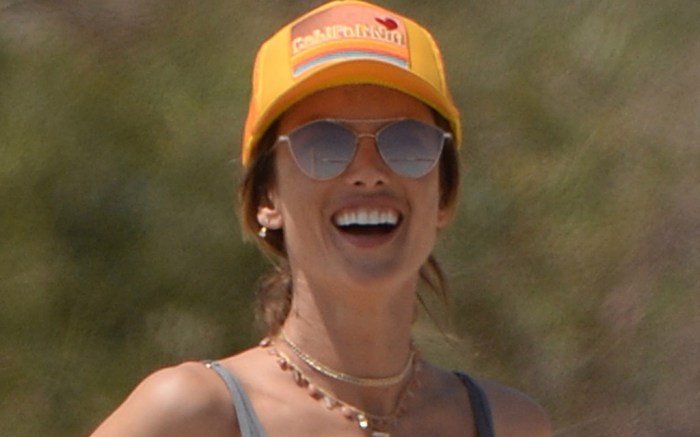 It may only be May but Alessandra Ambrosio already discovered this summer’s go-to outfit.

The former Victoria’s Secret Angel joined her beau Richard Lee on the beaches of Santa Monica, Calif., this weekend for a round of beach volleyball. For the outing, Ambrosio prepped for a sunny day in a ribbed gray bikini layered under cutoff denim shorts. Her outfit also included a 2000s-chic neon trucker hat and layered chain jewelry.

For footwear, the Brazillian native slipped off her go-to sandals on her way onto the beach. The model continued to support one of this year’s top trends: thong sandals. Her style in particular included a neon blue strap and a tan foam base.

Thong-toe footwear returned to the celebrity scene last year as one of spring and summer’s biggest trends and is expected to stick around in 2021. Be it classic flip-flops or thong-toe heels, the minimalistic silhouette falls in line with a ’90s-inspired revitalization of fashion, as seen with shoes like square-toe styles and pops of neon color. Stars like Alessandra herself along with Meryl Streep and Kim Kardashian amongst other major names are continued to support the trend in cooler temperatures.


Along with her title of a former Angel, Ambrosio has appeared in ad campaigns for Schutz, Jordache, XTI Shoes and Swarovski, among other brands. The model also launched her own swimwear line, Gal Floripa, last year with her best friend Gisele Cória and sister Aline Ambrosio.

Try out these next flip-flops inspired by Alessandra Ambrosio’s summery look.

Click through the gallery for more of Alessandra Amboriso’s bold street style over the years.