Alessandra Ambrosio Soaks Up the Last Days of Summer in a Tie-Dye Bikini, Shorts & Classic Flip-Flops 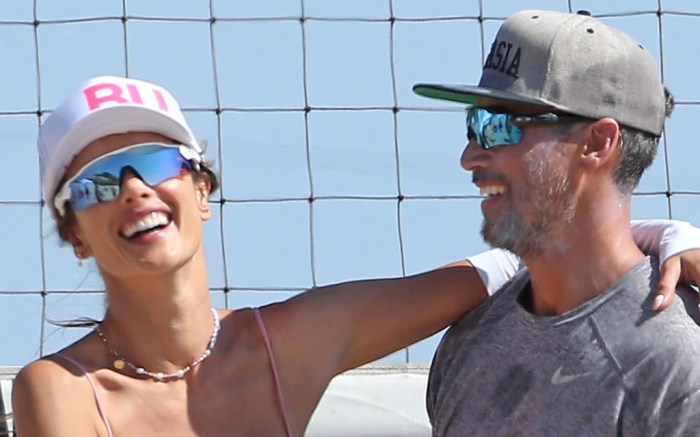 Alessandra Ambrosio hit the beach this weekend to get in one last round of beach volleyball before the start of fall.

Soaking up the last weekend of summer, the model hit the sandy shores of Santa Monica, Calif., alongside her beau Richard Lee on Saturday. For the outing, Ambrosio opted for a tie-dye bandeau bikini with coordinating tie-dyed shorts on top; her outfit also included a trucker-style hat, sporty shades and a beaded choker necklace.

In a continuance of her go-to style, Ambrosio went with classic flip-flops for her footwear of choice.

Thong-toe footwear returned to the celebrity scene last year as one of spring and summer’s biggest trends and has stuck around in full force for 2021. Be it flip-flops or thong-toe heels, the minimalistic silhouette falls in line with a ’90s-inspired revitalization of fashion, as seen with shoes like square-toe styles and pops of neon color. Stars like Alessandra herself along with Meryl Streep and Kim Kardashian amongst other major names are continued to support the trend in cooler temperatures.

Along with her title of a former Victoria’s Secret Angel, Ambrosio has appeared in ad campaigns for Schutz, Jordache, XTI Shoes and Swarovski, among other brands. The model also launched her own swimwear line, Gal Floripa, last year with her best friend Gisele Cória and sister Aline Ambrosio.

Hop on the thong sandal trend like Alessandra Ambrosio in these chic pairs inspired by her look.

Click through the gallery to find even more of Alessandra Ambrosio’s street style over the years.