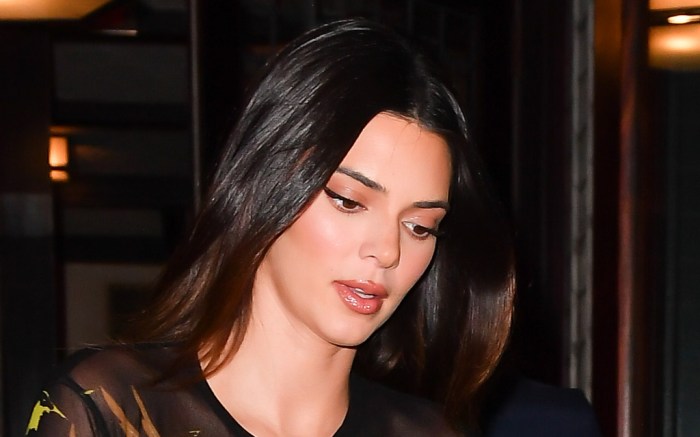 Kendall Jenner opted for statement style during her dinner with Kourtney Kardashian and Travis Barker this week.

The model was spotted at Zero Bond in New York on Thursday night in bold attire, modeling a long-sleeve mesh dress. The semi-sheer silhouette featured a mixed-media appeal with hits of bright yellow and dark black, all accented with an anime-style dragon design.

To keep the focus on her eye-catching dress, Kendall opted for a more subtle shoe. The supermodel’s sandals came balanced atop a rounded toe and a lucite block heel, all held together with see-through straps.

In addition to new fall style, you can oftentimes find Kendall Jenner in a selection of trending shoes. The reality television personality’s closet often includes more of an edgy, tomboyish touch, adding in pieces like chunky Prada combat boots and Bottega Veneta clogs. Still, the older Jenner sister appreciates a trending sneaker just like her youngest sibling, Kylie Jenner, previously stepping out in a mix of unreleased styles and buzzy pairs from Nike, New Balance, Off-White and more.

The media star‘s go-to picks for off-duty attire include By Far, Fendi, Jacquemus and Hermès as well. Together Kendall and her younger sister, Kylie Jenner, successfully started their own eponymous brand as well; the Kendall + Kylie label serves up a selection of hit apparel, footwear and accessories.

Try out the PVC sandal trend in these heels inspired by Kendall Jenner.

Check out more of Kendall Jenner’s style evolution at the gallery.