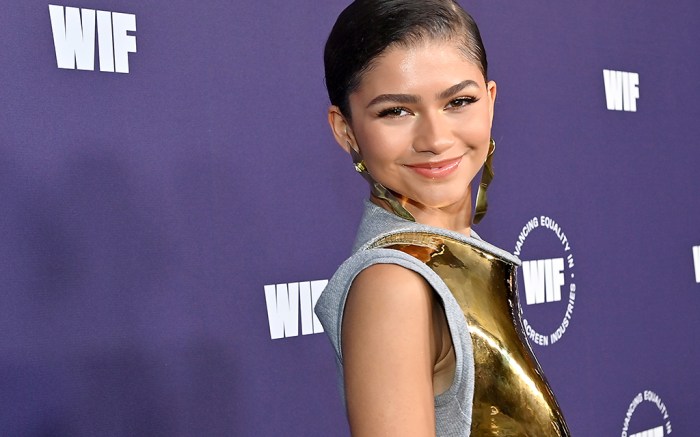 Zendaya can’t miss when it comes to nailing red carpet looks. The actress made an appearance at the 2021 WIF Honors on Wednesday night at the Academy Museum of Motion Pictures in Los Angeles, wearing a dress straight off the runway from Paris Fashion Week.

For her ensemble, Zendaya could be seen in a Loewe spring ’22 look that featured distinctive brass plates on the upper half of the dress while the rest was made out of a gray knit-like material. To complete the outfit, she wore matching Christian Louboutin gold pumps.

This sculptural piece — and the rest of Jonathan Anderson’s Loewe collection — made waves last week during its runway presentation in Paris for its craftsmanship and psychedelic experimentation. (There were even shoes designed with cracked-eggs in place of heels.)

The look that Zendaya wore on Wednesday, for instance, was handcrafted in France by metal sculptors using unique soldering and hammer techniques.

This wasn’t the first time Zendaya has worn an imaginative dress on the red carpet. Most recently, she attended the premiere of “Dune” during the 78th Venice Film Festival, wearing a custom Balmain piece that made headlines. The bespoke leather gown was crafted using an exact model of the star’s bust, which gave off a perfectly sculptured silhouette.

Tonight, Zendaya was honored alongside Marlee Matlin and Jean Smart at the Women in Film 2021 WIF Honors, which supports WIF’s educational and philanthropic programs and its advocacy for gender parity for women throughout the industry. Other honorees included “Coda” writer Sian Heder, “Hacks” actress Hannah Einbinder and producer Ashley Levinson.

This year, the annual benefit was themed “Trailblazers of the New Normal” to celebrate the women who are transforming the industry for the better.

In addition, WIF Honors debuted the Jane Fonda Humanitarian Award, which is named for its inaugural recipient and in recognition of Fonda’s fearlessness in speaking out and inspiring generations of activists.

To see Zendaya’s red carpet style evolution through the years, click through the gallery.